“Interest Rates – “Nowhere to Go but Up” 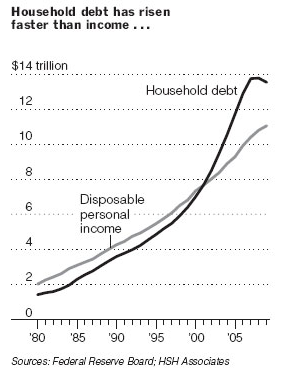 Even as prospects for the American economy brighten, consumers are about to face a new financial burden: a sustained period of rising interest rates.
Multimedia

That, economists say, is the inevitable outcome of the nation’s ballooning debt and the renewed prospect of inflation as the economy recovers from the depths of the recent recession.

The shift is sure to come as a shock to consumers whose spending habits were shaped by a historic 30-year decline in the cost of borrowing.

Nelson D. Schwartz is the European economics correspondent of The New York Times, based in Paris, reporting on companies and economic trends on the Continent. He joined The Times in June 2007 and worked as a feature writer for Sunday Business before heading to Europe in September 2008. A 1995 graduate of the University of Chicago, where he studied Russian and American history, Mr. Schwartz grew up in Scarsdale, N.Y., and lived on the Upper West Side in Manhattan.

From 1997 to 2007, Mr. Schwartz was a senior writer for Fortune, where he reported from New York and more than a dozen foreign countries, including Russia, Britain, Iraq, Libya, Kuwait, Argentina and Brazil. He received an honorable mention from the Overseas Press Club in 2006 for his interview with Hugo Chávez and his portrait of Venezuela’s oil industry in Fortune.

He began his career in the Washington bureau of The Baltimore Sun, and also worked for Smart Money magazine in New York covering personal finance. A keen bird watcher, he has made time for bird-watching during reporting trips in Iraq and Kuwait, as well as South America.