Posted by Dylan Grice via Mauldin's Outside the Box 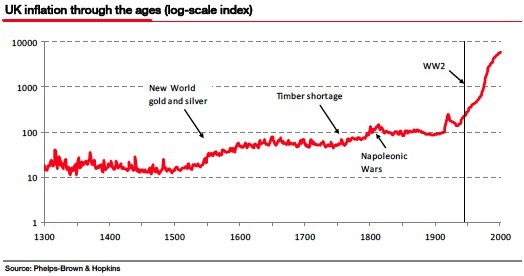 This week I thought I would give you an Outside the Box with a more European flavor.

Dylan Grice of Societe Generale (based in London) is fast becoming one of my favorite writers. This thought-provoking piece makes us meditate on whether central banks will print money in response to the fiscal crisis in the developed world countries. I am not certain that all central banks will print with abandon, BUT we need to think about what happens if they do.

John Mauldin, Editor
Outside the Box

The eurozone’s fiscal farce offers a revealing glimpse of the future: sovereign crisis begets banking crisis begets central bank nose-holding while the printing presses roll!! More immediately though, it’s making equities look interesting again. Markets overall merely look less overvalued than they did. But undervaluation is emerging in some areas. And the VIX recently traded at 40. Selling out-of-the money puts at such levels (or higher), on companies you’re happy to own anyway is a good way to be paid for your patience.

* The chart below shows the UK RPI from year 1300. From it, we can see that there have been inflationary episodes – the 16th century influx of new world gold and silver, the 18th century timber shortages, the early 19th century Napoleonic Wars – but that systematic CPI inflation is relatively new, and only started in earnest after WW2. This structural break coincides with the attainment of a voice in politics by ordinary people in developed economies: since voters rarely opt for economic pain, their elected representatives soon found they had to avoid it at all costs. Hence the relatively modern inflationary bias of “macroeconomic policy.”

* When that inflationary bias dictated lowering rates in the face of a threatened recession more quickly than you raised them in a recovery, it seemed harmless enough. But the crash of 2008 and its sovereign debt aftermath have changed everything. It’s difficult to exaggerate just how dirty the phrase deficit monetisation was when I studied economics at university: loaded with evil images of political irresponsibility and short-sightedness, it evoked the haunting spectre of catastrophic and ruinous hyperinflation. It’s what they did in Weimar Germany; it helped cause WW2; to say it had an image problem would be a grotesque understatement. No wonder it’s been rebranded as quantitative easing. When faced with the prospect of a financial crash causing a nasty recession – or worse, a depression – few doubted that Anglo-Saxon central banks would do whatever was necessary, including breaking the taboo of deficit monetisation … sorry, engaging in quantitative easing. But the ECB was supposed to be different. The ECB was supposed to be genuinely independent. The ECB was modelled on the Bundesbank – itself forged in the white hot furnace of Weimar’s hyperinflationary trauma … So it was always going to be an interesting collision: what would happen when the unstoppable force of threatened financial wipeout met the immoveable object of the ECB’s hard-money dogma?

Well, the force stopped and the object moved … sort of. The market’s panic over eurozone debt subsided … for a while, and the ECB began quantitatively easing … kind of. The EU’s “shock and awe” $1trillion rescue was certainly a big number and reflected European governments going all in. But going all in is risky if you don’t have a strong hand, and the EU’s seems weak. Two-thirds of the rescue money comes from the EU itself, which means that the distressed eurozone borrowers are to be saved by more borrowing by … er … the distressed eurozone borrowers.

Enter central banks. In 2009, the BoE printed £200bn, thus completely financing the UK government deficit. It can’t have felt good about doing it but since the alternative scenario was so scary – financial meltdown and possibly IMF support – it held its nose and did it anyway. It said it was going to sterilise the intervention, but on discovering that such was the financial system distress it was unable to, it just carried on regardless. In the US, the Fed printed $1.25 trillion to monetise the problematic mortgage market. It also said it was going to sterilise the intervention, but like the BoE it soon found it couldn’t, and like the BoE continued anyway because the alternative financial meltdown scenario was too scary to contemplate.

Today, the ECB is buying insolvent eurozone government debt which it is promising to sterilise. Yet they face the same stark calculus faced by their Anglo-Saxon cousins in 2008. You can only worry about the economy’s ?price stability’ if the economy hasn’t already melted down! So here’s my prediction: they won’t sterilise, and the program will expand.

Since banks are typically stuffed full of government bonds (the first chart below shows eurozone financial institutions’ holdings of government securities as a share of capital), instability in government debt markets implies instability in bank balance sheets. So sovereign crises and financial crises are joined at the hip (second chart below). And since financial crises affect banks’ ability to lend, which poses obvious risks to the rate of employment, the need for a central bank response to the threat of financial collapse is clear: What’s interesting is that central banks feel they have no choice. It’s not that they’re unaware of the risks (although there are profound behavioural biases working against them in their assessment of those risks). They’re printing money because they’re scared of what might happen if they don’t. This very real political dilemma is what is missing from the simplistic understanding of inflation as “always and everywhere a monetary phenomenon.” It’s like they’re on a train which they know to be heading for a crash, but it is accelerating so rapidly they’re scared to jump off.

Incidentally, this is exactly the train Rudolf von Havenstein found himself on as President of the Reichsbank during the German hyperinflation. According to Liaquat Ahamed’s work on von Havenstein’s dilemma, in his majestic book ‘Lords of Finance’ ” … were he to refuse to print the money necessary to finance the deficit, he risked causing a sharp rise in interest rates as the government scrambled to borrow from every source. The mass unemployment that would ensue, he believed, would bring on a domestic economic and political crisis, which in Germany’s [then] fragile state might precipitate a real political convulsion.”

Most economists seem to think that QE puts us in uncharted waters. It doesn’t. Printing money to finance government expenditure is a very well trodden path which is as old as money itself: persistent monetisation causes inflation. Of course the current monetisation need not be persistent. Central banks can theoretically just stop it at any time.

But what does it all mean? The question to my mind isn’t whether or not inflation will accelerate from here. If government balance sheets are in as big a mess as I think they are, inflation is inevitable. The more interesting question is what kind of inflation can we expect?

I hope to explore this properly in another note soon, but suffice to say for the time being that the typical framework economists use to think about inflation – which they proxy by changes in the CPI – is narrow, incomplete and fails to do justice to the richness of inflation as a concept. Asset markets (e.g. real estate, equities, etc.) are as prone to inflationist policy as product markets (indeed, in recent decades they have been far more prone to inflation than product markets), so one way of buying inflation – at least in its early stages – is to buy risk assets.

Of course, buying expensive risk assets on the view that they’re going to become more expensive is a dangerous game to play, but since government funding crises hammer risk assets while printing money inflates them, such funding crises should present decent value opportunities to buy into beaten up assets before the inflation ride.

Does today represent such an opportunity? We’re still nowhere near the distressed “all in” valuation levels I suspect the eurozone crisis merits (let alone the weakness in leading indicators Albert has been pointing out – what will a cyclical downturn do to government budgets?), but value is emerging and there are more stocks worth nibbling on than there have been for a while. The following chart shows the percentage of ‘bargain issues’1 in the nonfinancial FTSE World index has risen to just over 2% from under 1% a few months ago. Regular readers know that I estimate intrinsic equity values for each of the stocks in my universe (I now use the FTSE World index and include emerging markets) which I compare to the stock prices. An intrinsic value to price ratio (IVP ratio) greater than one implies intrinsic value is higher than market prices and so equities are undervalued. The first chart below shows the average IVP ratio for France, Germany, Italy and Spain at 0.85 is more attractive than it’s been for some time, without being outright undervalued as it became during, say, the ERM crisis in 1992. The next chart shows the cross section of valuations across all markets. It can be seen that the key European markets that are attractive remain the UK, Italy, and just about Norway. The table at the end of the document shows stocks with estimated intrinsic values that are higher than current market prices (IVP>1) and these stocks deserve a closer look. I’ve constructed the intrinsic value model (a version of Steve Penman’s residual income model) on the assumption that I want a minimum 10% return. This is quite exacting, but the stocks in the table are all currently valued at levels consistent with such performance.

Finally, the one asset class unambiguously cheap right now is volatility. The VIX and the VStoxx are trading well above their long run averages. That doesn’t mean they can’t trade higher still but, whether you like my IVP approach or not, you’ll probably have a watch list of stocks with a clear price at which those stocks are cheap enough to buy. With the VIX above 40 – as it was earlier this week — it’s might be worth considering writing out-of-the money puts on those stocks. If you want to own them at those out-of-the money levels anyway, by writing generously priced options you’re being paid well for your patience. Footnote:
I define a bargain issue as a stock with an estimated intrinsic value (see below) at least one-third higher than its market price (IVP>1.33), positive five year trailing EPS growth and positive expected residual income growth. These stocks have a backtested annualised return of 23% (list available on request).

John F. Mauldin
Outside the Box