Panic in the Air 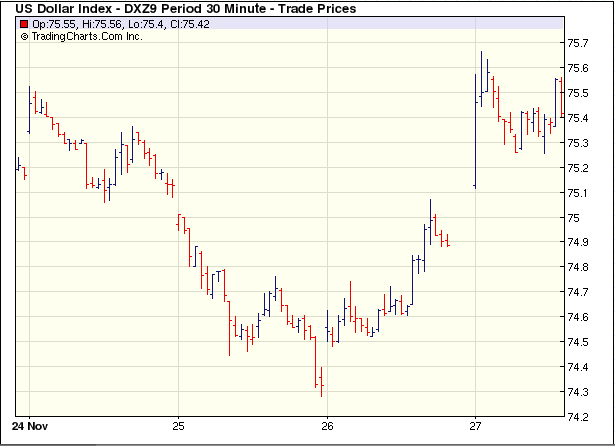 THE YEN AND THE US DOLLAR ARE SOARING AND PANIC IS IN THE AIR as the world is focusing again this morning on the news out of Dubai that Dubai World, the quasi-government controlled “investment” vehicle there has all but declared bankruptcy. Panic is indeed in the air, and well it should be, for this is amongst the worst of news one might conjure up and is one more spear driven into the heart of capitalism by greed and over-extension.  We are seeing capital fleeing to safety
where it can, and we are seeing massive unwinding of short US dollar positions as the “carry trade” that had been wound up is now being unwound under duress.

This unwinding process shall not likely be a one-off, one or two day circumstance. COMMODITY PRICES  ARE UNDER MATERIAL, EVEN MASSIVE, DURESS EVERYWHERE and no one should be surprised given the severity of the dollar’s advance this morning.  It matters not which commodities one is concerned with… base metals… grains… the “soft” commodities… precious metals… all are weak and all are weakening as the “carry trade” that helped sponsor the rise in these commodities is
now being unwound with a vengeance. Dennis Gartman spoke about his timeless trading strategy at the Super Summitt go HERE for the Speaker Lineup and  Sign Up HERE, Much more from some of the worlds best traders including: