On the Brink of an Asset Explosion 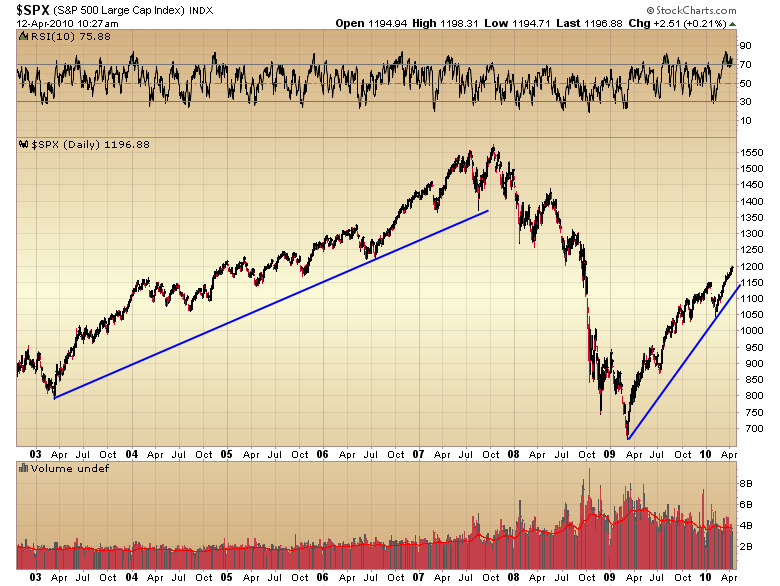 Compare the angle of assent of this cyclical bull to the last one. (go HERE for the full article with 6 larger Charts) It’s readily apparent what affect the trillions and trillions of dollars central banks have pumped into the system is having.  I think Ben has clearly proved his point that in a purely fiat monetary system deflation is a choice, not an inevitability.

As long as a country is willing to sacrifice its currency there is no amount of deflationary pressure that can’t be printed away.

However, no amount of printing can erase the underlying problems.  And those problems are going to persist until they are cleansed from the system.  In his mad attempt to avoid the mistakes of the depression Bernanke is going to create a whole new type depression.  This time the depression will materialize as a hyper-inflationary storm.

What the powers that be fail to understand is that we are going to suffer a depression that is unavoidable when a credit bubble forms and pops. All we are doing is choosing the form of the depression. In this case the memory of the deflationary depression in the 30’s has sent us down the other track into the beginnings of a hyperinflationary state.

Going back to our charts you can see that the February correction separated the second leg of the bull from the third and almost exactly matched the `04 correction in magnitude if not in time.  Remember everything is unfolding faster this time.