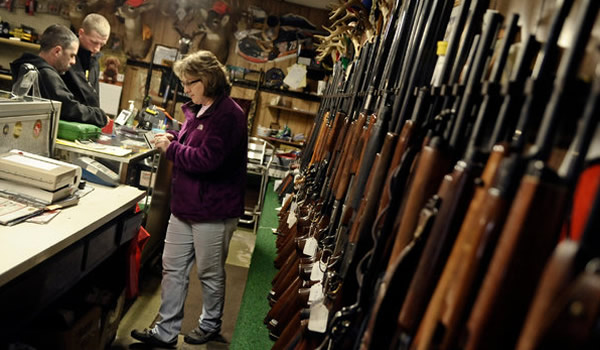 Rushing to beat Obamacare and gun bans. Americans can’t trust the government not to infringe on their traditional freedoms. There is a New Year stampede developing that we have not seen for a long time.

Gun stores are swamped with panicking customers. They are looking for handguns, semiautomatic rifles, and as much ammunition as they can afford. But buyers are not just camouflaged hunters, conspiracy theorists, and gun hoarders. Instead, many of those purchasing firearms and ammo are so-called ordinary people, convinced that this administration will soon begin to centrally register — and then ban — far more than assault rifles.

There were probably lots of reasons why Adam Lanza shot 26 innocent children and adults at Sandy Hook Elementary School in Newtown, Conn. But so far the government and media are not focusing much on his prior obsessions with violent video games, on society’s seeming inability to hospitalize the unstable, or on the crude violence peddled in Hollywood and through popular music that portrays shooting people as a sort of cheap fantasy without consequences.

Instead, the administration is zeroing in on the ability of Lanza’s mother to legally buy semiautomatic weapons that her son then stole to murder her and the schoolchildren and employees. The result is a pandemic of fear that the Second Amendment will be reinterpreted and redefined as never before.

With the resolution of the fiscal cliff, taxes on those who make more than $400,000 are going to rise considerably as they will revert to the Clinton-era rates. But this time the landscape is radically different.

There will not be much deficit reduction and certainly no balanced budgets, adding insult to injury for those who must pay the government far more.

The new, higher rates come on top of state-income-tax hikes in much of the country — all in addition to further increases in capital-gains taxes, new Obamacare taxes, and much steeper inheritance taxes. The result is not just a 3 percent to 5 percent increase on the well-off, but for some payers aggregate hikes of 7 percent to 8 percent or even more.

Most Americans are already seeing their health-insurance premiums shoot up in anticipation of the 2014 federal takeover of health care. To pay for the vast Obamacare programs — whose details still remain a mystery for most — money will be raised in all sorts of bizarre ways, from reducing Medicare coverage to taxing new medical devices and some drug makers.

A sense of foreboding hangs over the currently insured. Almost everyone is unsure whether the new federal statutes will still cover currently covered procedures — or whether they will be rationed or curtailed altogether. Expect many people to schedule check-ups and major medical procedures in 2013 before Obamacare kicks in.

There is a common denominator that underlies all this multifaceted uncertainty. Fairly or not, there is a sense that those who played by the rules and did well have instead done something wrong, or at least are under suspicion — and it is now time for their government to seek atonement from them. Worse still is the dread that the government’s new policies and taxes will not solve problems but may make them worse and prompt even more government engineering.

For the law-abiding gun owner, the federal government may make it more difficult to buy legal arms — even though there is little evidence that gun restrictions per se have stopped shootings, and some evidence that states with lots of armed citizens have lower crime rates. If the semiautomatic-rifle ban does not work, what gun will be banned next to stop violence?

Most well-off taxpayers add up their local, state, federal, payroll, and capital-gains taxes and feel they really have paid their “fair share.” They all know that handing over more won’t solve the fiscal crisis, but instead will only empower more government deficit spending. If new taxes won’t stop deficits, what’s next?

The ability of citizens to protect their households, to keep at least half their earnings safe from various government taxes, and to use their own judgment in making health-care decisions is central to a free people. No wonder the fear that a radically growing government will infringe on such traditional freedoms is stampeding millions of panicky Americans in all directions.

— Victor Davis Hanson is a classicist and historian at the Hoover Institution, Stanford University, and the author, most recently, of The End of Sparta. You can reach him by e-mailing author@victorhanson.com. © 2013 Tribune Media Services