Money on the sidelines pushing the Stock Market Higher 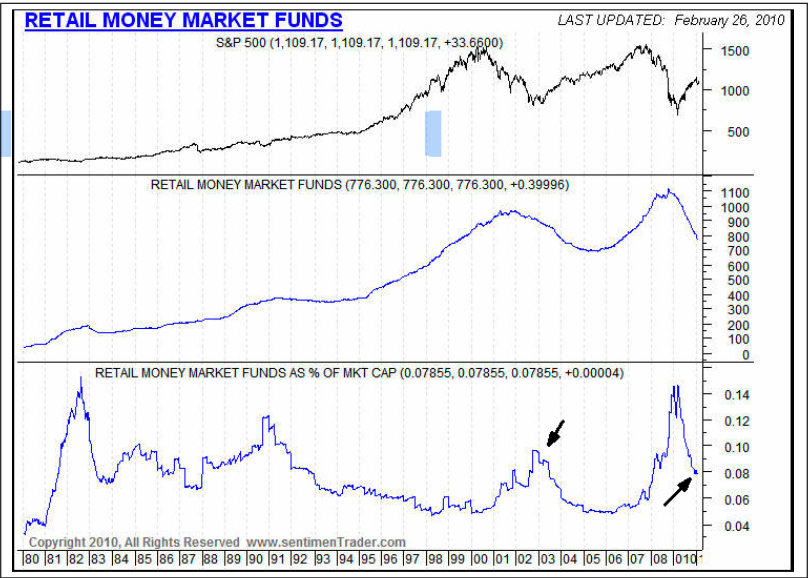 For a number of months I’ve been telling you that the market continues to look higher because of all of the money on the sidelines, much of it making less than 1%. Over time, a lot of these funds tend to find their way into the stock market.

This graph is courtesy of Jason Goepfert, of Sentimentrader.com. At the market bottom in 2009, retail money market funds as a percentage of market capitalization were as high as the major bottom in August of 1982 and we all know what happened after that.

Given this major liquidity event, it would appear that we are still owed a great deal on the upside.

Even now, with much of the liquidity having been dissipated, we are still almost as high as we were at the major bottom in 2003 (arrows).

Even with the major uptrend that we have already had, there remains a lot of skepticism. We have a name for what we’ve been experiencing. It’s called “climbing a wall of worry”.

Yes, there are a lot of economic problems, most specifically unemployment and we have an administration that doesn’t seem to be all that fond of private enterprise, but none of this matters right now.

Let’s look at history. The unemployment rate has only been higher than the current 9.7% for 16 out of the 764 months since January of 1948. That’s only 2% of the time. The worst readings during this period were the 10.8% unemployment rates in November and December of 1982, but by then the S&P 500 was already up 37% from the August lows and headed considerably higher.

We bring this up because so many pundits, even those who have been around long enough to know better, keep bringing up the economy as a reason to  not own stocks.

Looking at the economy when trying to understand the stock market is not only useless, it is actually harmful. Stocks frequently go up when the economy is poor and down when it’s doing well. A stock may go up because of a profitable overseas operation that has nothing to do with the U.S. economy.

Studying the economy is alright if you’re an economist and are hired by some company to do so. Yes, we do discuss economic news developments
on our nightly hotline, but only because it has a short term knee jerk influence on stock prices. This tends to dissipate rather quickly.