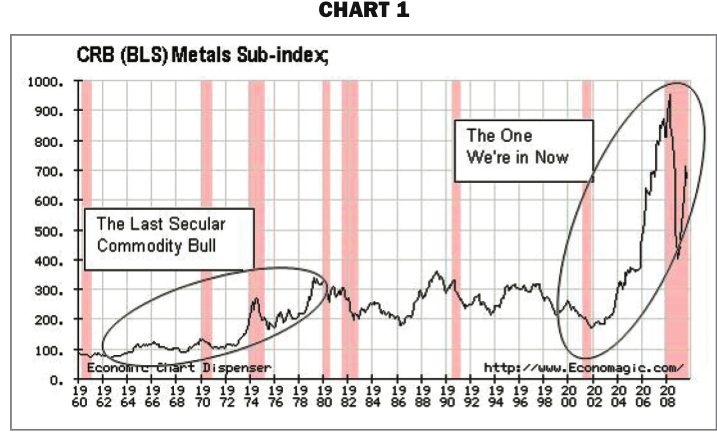 Now that 2009 is drawing to a close, it’s time to read the tea leaves and gauge how the metals markets might perform going forward.

The U.S. dollar story is as much about the shift of wealth to the East and disenchantment with Western governments’ fiscal management as it is about the perils of Wall Street. It’s following a path trodden by many imperial currencies before it, and there are good reasons to think the dollar will be at lower levels before its fall ends.

The gold market continues to look good, as do the gold explorers added to our Hard Rock Analyst (HRA) list this year.

With that said, we’ll move on to look at the base metals complex. Commodities in general and metals in particular have been among the best performing sectors of the market this year. This has led to a lot of confusion among traders and commentators. Many view current metal prices with great suspicion because they are not doing what they are “supposed” to. There has been grudging acceptance of recent moves in precious metal prices, but prices for other metals have many screaming “bubble!”

Are current base metal prices all about liquidity and hedge-fund trading, or have there also been fundamental changes in the market that point to good things ahead? We are very much in the “good things ahead” camp.

That said, most tradable metals are definitely getting a heavy assist from the declining dollar. There is no doubt some of this year’s renewed strength in base metal prices is from traders using them as “anti-dollar” trades or hedges against potential future inflation.

For some perspective, take a look at Chart 1. This….