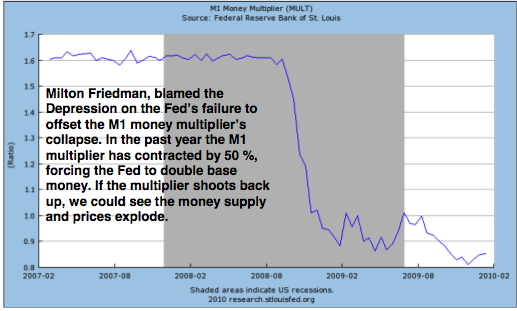 Beginning about Wednesday, last week, the markets decided to get ugly and turn down.  This is an event we had predicted for some time admonishing those with significant profits to take some.  The attack on the U.S. banking system by the Obama Administration has certainly had its impact as has the negativity by certain in Congress (both sides) over the re-nomination of Chairman Bernanke.  We do expect Dr. Bernanke to be re nominated.  Today we shall see the two most recent Treasury secretaries (Paulson and Geithner) testify. The finger pointing will now be directed toward the history of the AIG and possibly the Fannie and Freddie fiascos.

There is a very powerful populous sentiment seeking to place blame today and these all these actors are now in the cross hairs. Congressmen and Senators (from both sides of the aisle) are hearing populous footsteps – and they are scared.  Power can dissipate quickly. Only the Administration seems tone deaf on this building tsunami. Couple this with the political shifts we have seen in Virginia, New Jersey and Massachusetts and you must conclude that there is change coming – and probably not from this Administration or Congress.

At present the financial system in the US is still broken.  What we do know is that over the past two years as the crisis heightened, debt was simply shifted from failing entities (AIG for example) to the Federal Reserve and eventually the public.  At the Fed the leverage ratio is now 50 to 1.  Everyone is watching China.  Will that become a bubble  that will eventually burst?  In other words the new global economic engine, at least in the minds of many people, is now China – and China is beginning to tighten.

The St Louis Fed’s multiplier ratio and the velocity of money (MZM/GDP) are still flashing red. Unemployment, a lagging indicator, is dragging the economy down. Housing numbers released yesterday were horrible.  Sales of previously owned US homes suffered the worst drop in December.  The boost from the tax credit is over.  Can a housing market recovery be sustained? Existing home sales fell 16.7% in December – the sharpest decline since 1968. Sales were 450,000 below expectations. As long as the government spends on housing we recover – once Washington stops ….?  Low mortgage rates also subsidized by Federal Reserve buying of mortgage-backed securities willcore of the US recovery. It seems quite likely that equity markets need a break after almost a full year of this equity market run-up.  I have often maintained, during the past year, that this was a bear market rally. I still hold that opinion today. As you can see in the chart below, this pullback is the largest since July 0f 2009 and it has broken through its 50 day moving average – for the first time since July.  It would appear that the psychology of the market has changed.  Those in Washington (on both sides of the aisle) have started to place blame (Bernanke, Geithner and bankers) in order to deflect public dissatisfaction with a 10.4% unemployment rate and a 17.8% underemployment rate.  The unknown is just how much damage will ultimately be done by the overreaction to the events of the past three years beginning in July 2007  and the gutting of the financial system by the newly anointed Washington Paul Volcker.