A Keen look at Key Markets 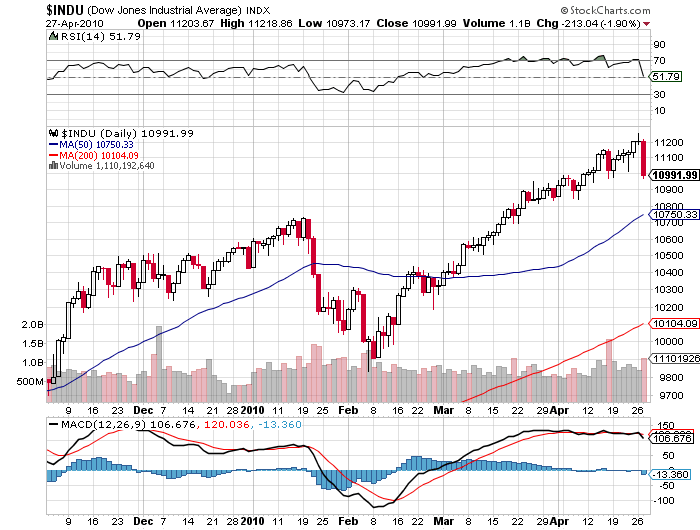 On Major Moves, Peter Grandich has been very right see below.

U.S. Stock Market – This is as good as time as any for me to reflect back on what I’ve said since the DJIA made an all-time high in October 2007 and what has actually taken place.

Just a couple days after that all-time high, I wrote it was not only time to sell all stocks except those related to precious metals but also time to actually short the stock market. The results were the worst stock market decline in the modern era. Then, just a day before the ultimate low, I wrote I was removing my bear suit and looking for the mother of all bear market rallies. Shocking as it was, I even went so far as to recommend stocks like Microsoft and Intel (Forgive me Father, for I have sinned).

While many prominent bears have been skinned by remaining bearish or becoming bearish through this rally, I’ve thankfully refrained from putting my bear suit back on again (despite a barrage of emails and questions at conferences about how I’m going to miss the top). I’ve argued that the economic rebound (albeit not something to be proud of), should continue through at least the June/July period of 2010. While DJIA 11,000 was the upside envisioned from the dark days of early 2009, in recent times I suggested we can add several hundred points before the end of this “bear market” rally comes to “bear.”

While we’re overdue for a correction/consolidation, I believe we’re in the midst of a mini-market-melt-up whereupon professional investors who have greatly underperformed are being forced to buy in for fear of missing the big enchilada. The public in general has also missed much of this and I’m now hearing all the typical catch-phrases the public utters as it runs into a move far more closer to the end versus the beginning.

I continue to believe the overall trend remains up into summer but come late summer/early Fall, the hot topic that will grip the markets and be the likely catalyst to finally put an end to this incredible bear market rally shall be the November elections and the political polarization of America. Gold – Getting past the usual games played on options expiration days like today, gold remains in the “mother” of all secular bull markets. While we know gold is the ultimate hated investment by those in and around the investment community, it has been especially frowned upon by prediction after prediction of its demise (bubble, top, etc.) only to blow through those feeble lines in the sand.

You should recall when I turned bullish on the U.S. Dollar I also said fears of gold’s demise due to a stronger U.S. Dollar were misplaced and the surprise would be how well gold does despite the fears. Well, look at it in terms of currencies outside of the U.S. Dollar and all you see are numerous record highs. You’re never ever going to get confirmation of gold’s bullishness from Wall Street or the media in general, for to believe in $2,000+ means you also don’t buy into “Happy Days Are Here Again.” U.S. Dollar – The bear market rally marches on and I continue to believe the upside shall be limited to the 83-84 area basis the U.S. Dollar Index. The so-called economic rebound should underpin the dollar for the foreseeable future, but this bear market rally is just that: a countertrend rally within a long-term secular bear market. U.S. Interest Rates – Despite what you may hear from Wall Street, interest rates should and would be much higher if not for one thing: the Fed. Despite the mother of all artificial markets, America shall pay for this down the road along with its incredible debt levels and no Fed finger in the dyke shall forever keep it plugged. Oil and Gas – Americans may have grown accustomed to current gasoline prices but that doesn’t take away from the fact of how much it hurts the economy. $90+ oil appears in the cards and that can be an added top factor by late summer. The world is overflowing with natural gas and we could see $2 again this summer. The main purpose of my model portfolio was to provide ideas for speculative capital gains. Because there are currently some positions in the portfolio mainly as a way to play my view overall on a certain market or markets and may not offer large capital gains opportunities, I’m going to remove them from the model. You can choose to still hold them if you agree with my view on the particular market they track.

Nevsun Resources reported it’s well on its way to reaching commercial production by years-end. East Asia Minerals continues to show it’s a gigantic project that appears to have takeover written all over it.

No word yet on the closing of Crescent Resources proposed private placement. Spanish Mountain Gold is simply cheap at the moment.