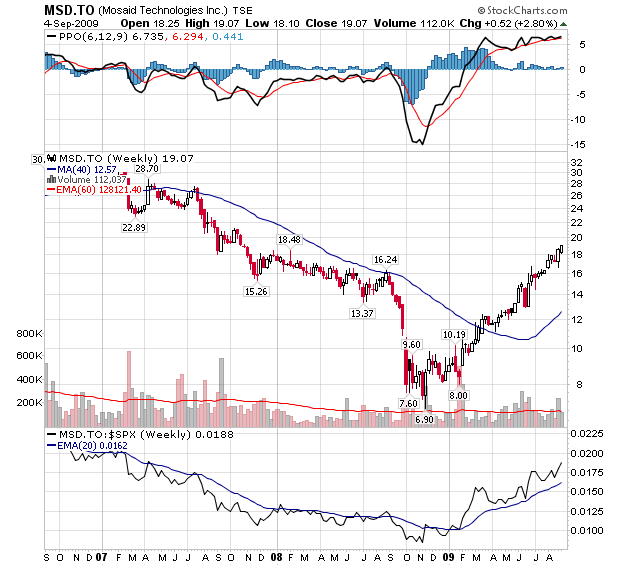 The weekly trend we have become accustomed to over the past month continued this past week as five-day period came in like a lamb and roared out like a lion.

For the past four weeks, it appears the markets have been stuck on repeat, as investors have gone home each Friday happy with their tidy profits in the rebound-rally and after careful consideration and a critical examination of the general economic outlook, decided to take profits early in the following week.

Just when it appears we are headed for a meaningful correction, the market latches on to a piece of decent news (in most cases data that was “not as terrible as expected”) and rallies by week’s end to close up on the five-day session.

This week (after an early week sell-off “better-than-expected” or not as bad as expected, depending on your point of view), job data in the U.S. and Canada helped power Toronto’s main index above the 11,000 mark. The Canadian economy created 27,100 jobs last month, Statistics Canada said on Friday, compared with a median forecast of 10,000 job losses in a Reuter’s survey of economists. What is not reported in the data is that much of the work created was part-time and a key component in manufacturing jobs, continued to decline.

But, who am I to rain on this parade. What we can do to profit and protect downside in this market is buy companies with solid growth, good cash flow, zero-to-no debt, strong cash positions, and with solid yields.

One such company that we have already made solid money on this year from our Canadian Small-Cap Universe (www.keystocks.com) is Ottawa-based MOSAID Technologies Inc. (MSD:TSX). Listening to the news these days, it seems one can’t go ten seconds without hearing a financial index quoted. Ever lay awake at night trying to figure out what they mean and when they started? Well, Bucks, thankfully, your sleepless nights are now over.

The first and consequently most widely quoted index was created back on May 26, 1896, and the man you can thank for it was none other than Mr. Charles Dow. At that time, the Dow index contained 12 of the largest public companies in the U.S. Today, the Dow Jones Industrial Average (DJIA) contains 30 of arguably the largest and most influential companies in the world economy.

Most of us financial types define an index as “a statistical measure of the changes in a portfolio of stocks representing a portion of the overall market.”

Because Mr. Dow created his index back when the abacus was still commonplace, it had to be kept as simple as possible. The original DJIA was calculated by adding up the prices of the 12 companies and then dividing that number by 12. Nice and tidy. While these calculations were actually more like an average than an index, it served its purpose.

Today, computers do most of the work and the indexes are much more accurate and complex. For example, many of the larger indexes now are based on the market capitalization (stock price * shares outstanding) of a company’s stock rather than the stock price alone. Many argue this practice tends to “weight” each company’s relative size and influence more effectively.

Remember, each stock index is slightly different. They include different types and amounts of stock.

A. The idea behind the “Dogs of the Dow” strategy is to buy those Dow Jones Industrial (DJI) companies with the lowest P/E ratios and highest dividend yields. By doing so, you’re selecting those Dow stocks that are cheapest relative to their peers.

In a nutshell, at the beginning of a given year, buy equal dollar amounts of the 10 DJI stocks with the highest dividend yields. Hold these companies exactly one year. At the end of the year, adjust the portfolio to have just the current “Dogs of the Dow.” In theory, what you’re doing is buying good companies when they’re temporarily out of favour and their stock prices are low. Hopefully, you’ll be selling them after they’ve rebounded. Then, you simply buy the next batch of Dow laggards.

Why does this work? The basic theory is that the 30 DJI stocks represent well-known, mature companies that have strong balance sheets with sufficient financial strength to ride out rough times. Some people use five companies, some use ten, some just one. You might call this a contrarian’s favourite strategy.

Our independent research publications focus on uncovering companies that display “GARP” or Growth at a Reasonable Price. KeyStone’s publications provide both novice and sophisticated investors with reliable, objective and timely information on growing, profitable Canadian and U.S. publicly traded companies. We specialize in uncovering, before the broader market, under followed and undervalued small- to mid-sized stocks that are financially sound and producing solid growth in both revenues and earnings.

Our independent research focuses on uncovering companies that display “GARP” or Growth at a Reasonable Price. KeyStone’s publications provide both novice and sophisticated investors with reliable, objective and timely information on growing, profitable Canadian and U.S. publicly traded companies. From inception, we made a conscious decision to deliver professional style fundamental analysis of small-, mid- and micro-cap companies, a segment of the market typically ignored by traditional large financial institutions.

A hallmark of our research is independence. KeyStone is not affiliated with any bank or brokerage company, nor do its research publications accept any remuneration (cash or shares) for the inclusion of a company. Our purpose is to provide subscribers to our services objective information through independent research.

Both a product of our solid track record and a sign of standing in the small- to mid-cap market, KeyStone analysts are frequently quoted in respected publications, including the National Post, Calgary Herald, Investor’s Digest of Canada, and Canadian Money Saver, and make regular appearances on CKNW’s Money Talks with Michael Campbell, CBC Radio, ROBTV, as well as headline speaking engagements at several national conferences.