Wow – the Legendary Trader’s take on the CDN dollar 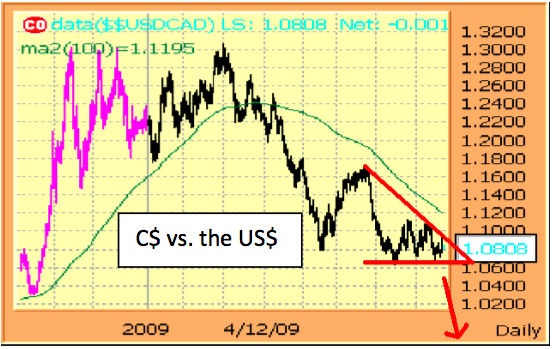 We note that as the US dollar is under pressure once again, the “other” dollars are not. The Canadian, Australian and New Zealand dollars are strong once more and that is as it should be, for their economies are stronger than is that of the US; their exports more viable and the propensity on the part of foreign nations to buy Canadian, Aussie and “Kiwi” goods seems to be rising at the expense of buying American goods. Let’s chalk this off to the simple notion that all things being otherwise equal, Chinese buyers of wheat, or steel, or crude oil, or coal, or water or any of the “stuff” of day- to-day economic growth will have a greater propensity to buy from these countries than from the US. Friendlier relations between Beijing and Ottawa, or between Beijing and Canberra or between Beijing and Wellington drive trade. With China’s buyers of raw materials scouring the world for these things, it is reasonable… it is even logical… to expect those buyers to find sellers in Vancouver, in Sydney and in Auckland.

We have been and we remain this morning concerted bulls of the Canadian dollar relative to the US dollar for the same reasons we have been bullish for the past several years on balance. The world needs energy: Canada has energy to go; The world needs food; Canada’s got food; The world needs base metals; they can be found in Canada…and Canada has the ports to ship those needs; it has the laws to protect contracts signed, and it has favourable and friendly relations with everyone… something the US cannot say it has or enjoys.