Posted by The Longwave Group 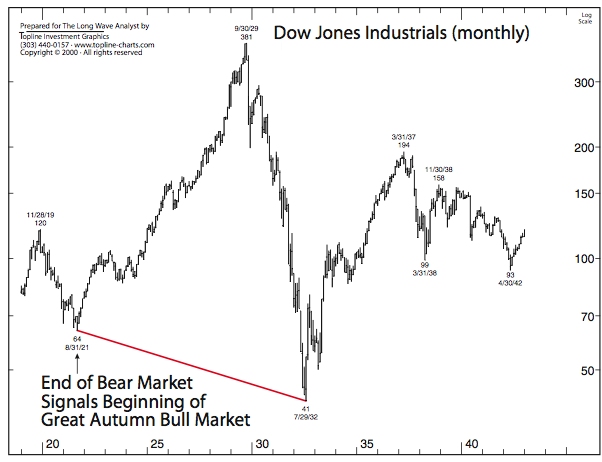 In September 1929, if a stock market forecaster had publicly proclaimed that the Dow was about to lose 90% of its value, would he have been subjected to ridicule. “Nobody wants to hear bad news let alone believe it, even if it’s true. So when a virtually unknown financial and economic historian, such as myself, suggests a seemingly outrageous Dow target of 1,000, it is essentially dismissed as a prognostication of a ‘know nothing crank’. And everyone continues to buy stocks for the long term – isn’t that what the experts are telling them to do?”

(Ed Note: an example of only three of the charts in this report) History has recorded very few financial bubbles. Charles Mackay in his famous Extraordinary Popular Delusions and the Madness of Crowds, which was first published in 1841, covers three: The Mississippi scheme initiated in France by John Law in 1719-1720; The South Sea Bubble, an English experience, 1720-1721; and Tulip Mania, an extraordinary Dutch bubble in 1636. In his book, A Short History of Financial Euphoria, John Kenneth Galbraith writes about the same three bubbles and several American bubbles, including the crashes of 1837, 1873 and 1929, which ended the speculative manias of the 1st,  2nd  and 3rd Kondratieff autumn periods and were followed by their respective winter depressions. Charles Kindleberger, in the latest edition of Manias, Panics and Crashes, published in 2005, lists 10, including the three discussed in Galbraith’s and Mackay’s books,  the 1920s autumn stock price bubble, and the Japanese stock and real estate bubbles that burst in 1990.

What is yet to be documented in any detail are the mania markets of the 1980s and 1990s, which far surpassed the bubble of the 1920s in both size and diversification. There were no derivatives of any consequence in the 1920s. The real estate bubble that was fostered by the past chairman of the Federal Reserve, Alan Greenspan, far outdid the real estate bubble of the 1920s, which was centred on the development of suburbs outside the cities and the building of skyscrapers close to the city centres.

“Nobody likes a bear. Most people have too much money invested in stocks. They can’t afford to lose money and they don’t like people telling them that they are going to lose. They are linked together in a common interest. As such, they form part of a crowd and are governed by a collective psychology that is essentially irrational. “From the moment they form part of a crowd the learned man and the ignoramus are equally incapable of observation.” Le Bon,  P.  23. “

A globally renowned economic forecaster, author and speaker, our founder, Ian Gordon, has garnered praise from many notable sources, including Robert Prechter in his book ‘Conquer the Crash’ and Eric Sprott, Chairman of Sprott Asset Management Capital. A student of economic and investment history and former investment advisor, Ian provides strategic investment advice to international and domestic fund managers, and numerous gold companies. Ian also travels internationally speaking about the Longwave Principle and his predictions in relation to the stocks, bond, real estate, commodities and gold markets. Visit the website HERE.