Jump in Gold Price – What Did It Really Say? 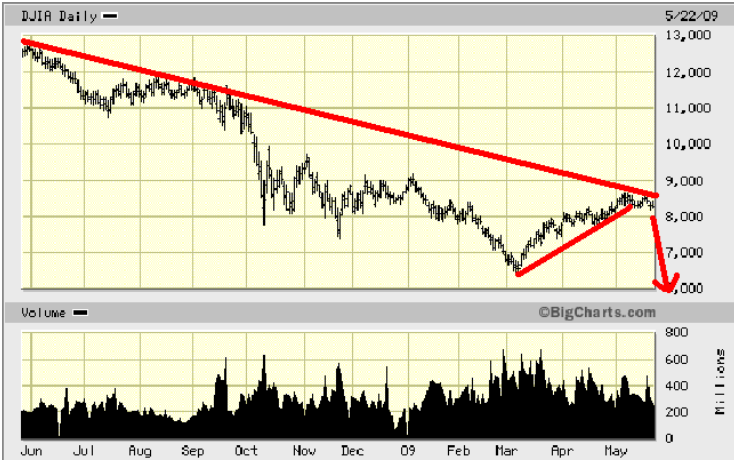 In the last weeks we have seen the gold price jump from the price we alerted our subscribers of $1,555, to reach just over $1,800. Contrary to the view of many analysts, we do not see this as a frothy overrun from which it will pull back. On the contrary, this rise in the gold price has said so much more than simply, trading peak.

Many have blamed the unfortunate S & P ratings agency for the market dramas in the last two weeks, but they were simply the boy who said ‘the emperor had no clothes on.’ For months now, we have known and commented on the fact that the debt crises on both sides of the Atlantic would lead to trouble. One hopes that the news is not as bad as it seems, but we all knew it was. The build-up of parallel crises added weight to the drama so when the Dow suddenly sank it was simply a postponed reaction. The fact that a ‘head-and-shoulders’ had completed its formation made the market ripe for fall.

Everybody reacted all over the world as this postponed reality was publicly accepted. The oil price fell to below $80, the dollar and the euro fell like a stone, the Swiss Franc and the Yen soared to economy-destructive levels and eventually the Fed confirmed that the U.S. economy should see no growth for another 2 years. The Chinese government called for a new global reserve currency to replace the dollar.

All in all, the global economic scene experienced a gear-shift,
down to a darker investment climate…

The$1,555 gold price had already signaled that it was going to take off in June, but the S & P trigger sent it soaring effortlessly to $1,800. Only now are these new realities being properly absorbed, although slowly…

We see the S & P downgrade as a judgment on the Congressional inability to properly assess the dire nature of the U.S. credit situation because of their fixation on party politics. It is the first time that the U.S. Congress has had to see the rest of the world react to the declining U.S. global economic dominance. It had to happen for the U.S. Congress to understand that the U.S. is responsible for its behavior and will face consequences if it does not adjust. It’s a change that has not happened for 40 years.

We do not see a change in the political behavior of Congress until more consequences force that change. There may be considerable economic pain before this happens, and the future brightens for the U.S. During this time the U.S. has to see that it is no longer the world’s economic axis, allowed to extract advantage from the rest of the world through its ‘exorbitant privilege’ of printing money to pull itself out of economic decline. As we forecast at the beginning of this year, 2011 would be a year of consequences!

As we move towards QE3, more dollar printing and the consequential inflation, we fully expect the reaction of the dollar to weaken much faster. QE3 will confirm that they have chosen inflation as a way out of a double-dip recession or deflation. The interdependence of currencies will prevent exchange rates from highlighting any currency’s weakness. We have seen this last week in the actions of Japan and Switzerland to weaken their safe-haven currencies. History will record that the announcement by S & P was simply a trigger for a new era of currency instability and the loss of currency values.

Only the gold price is now truly capable of measuring the weakness of currencies. The jump in the gold price over the last decade has been screaming this to all, but few outside of gold were listening. The leap since June of $250 reflected the acceleration in the speed of declining values.

It is natural for us to assume that the global monetary authorities will agree to a reformation of the monetary system that effectively addresses the mess it is in right now. Certainly we expect the mess to worsen considerably before this is accepted.

After that, who will be responsible for putting it right?
What obstacles will they face?

Politicians will have to please those who put them in power and cannot act independently of this power base, no matter how necessary a departure may be. It would be political suicide to do anything else –a consequence of democracy.

The obstacles will prevent the much-needed structural monetary reform. Are the current powers-that-be impartial enough or be franchised to formulate a globally reformed effective monetary system? Not yet, if we look back at the efforts of the U.S. Congress to cut their budget deficit.

What is next? History shows that willing change, when not forthcoming gives way to unwilling change! Unwilling change climbs out of wars or rupturing, destructive, crises that remove the above barriers and which license the powers-that-be to undertake needed, sweeping reforms.