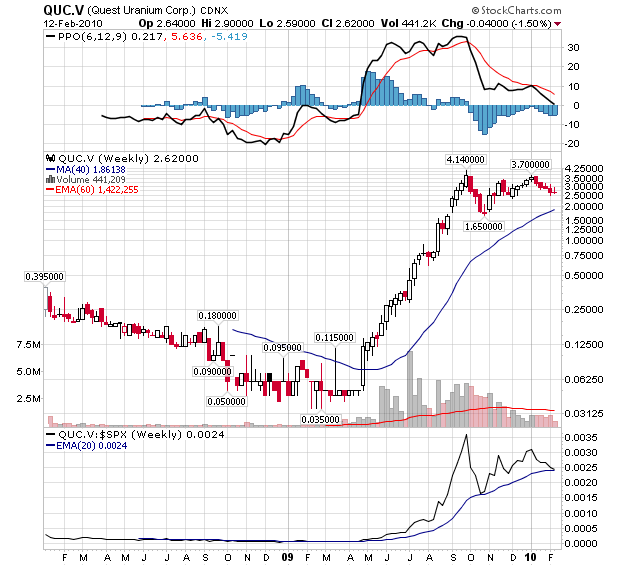 Quest Uranium Corp was created as a spinoff from Freewest Resources Canada Inc to hold the uranium exploration assets Freewest had staked in eastern Canada, including the Strange Lake in Quebec. Freewest shareholders received 1 Quest for 25 Freewest and the opportunity to participate in a rights offering before Quest started trading on Jan 11, 2008. The Strange Lake group, which includes the Quebec portion of the 52 million tonne Strange Lake rare earth deposit discovered by IOC during the eighties, became the company focus in April 2009 when a new target yielded high grade rare earth numbers with a distribution similar to Strange Lake and the junior decided to re-assess Strange Lake and the surrounding area in light of a high distribution of heavy rare earth elements. Sampling and drilling during the summer of 2009 led to the discovery of the BZone, a large near-surface deposit on the Quebec side which appears to be similar to the Main Zone. Metallurgical studies and 43-101 resource estimates are planned before Quest resumes work in Q2 of 2010 to delineate the higher grade pegmatite layers. Lithic Resources Ltd is headed by Chris Staargaard who ended up completely in charge in late October 2009 when RCF sold its control to an investor group. The flagship project is the Crypto carbonate replacement zinc deposit in Utah where a 43-101 resource estimate in November 2009 confirmed the presence of a 2.5 billion lb zinc resource with significant copper and indium credits. The smaller oxide portion is amenable to open pit mining, while the richer and larger sulphide resource, which has higher indium grades, will require underground mining. For 2010 Lithic is planning a scoping study and a new round of drilling with an estimated US $6-8 million cost whose purpose will be to collect additional material from the main CRypto zone for metallurgical studies, test the eastern strike extension for addtional zinc-indium skarn mineralization, test the high grade silver potential beneath the old Utah silver mine workings, establish the nature of the high grade moly mineralization previously encountered beneath the main skarn zone, and set the stage for a $20 million plus feasibility study in 2011 which will require an underground drilling program so that an optimized mining plan can be developed which targets high grade zinc-indium ore early in order to achieve rapid payback. First Point, led by President and CEO Peter Bradshaw, is focused on the Americas where it has both base and precious metals projects in Canada, the United States, and Mexico. First Point’s primary focus is on two nickel projects, Decar in British Columbia and Joe in Oregon, that host disseminated nickel-iron alloy mineralization in intensely altered ultramafic rocks. These properties represent large scale targets in the order of 300 million tonnes plus of open pittable sulpher-free nickel mineralization than could potentially be sent directly to steel mills after magnetic and gravity based concentration without smelting and refining, with obvious potential economic implications relative to sulphide nickel projects. On November 13, 2009 First Point announced it had optioned its flagship Decar project to a subsidary Cliffs Natural Resources where Cliffs can earn up to 70% by taking the project through to a bankable feasibility study. As part of the deal Cliffs is purchasing a 19.9% equity stake in First Point, which will use the funds to mount a global search for additional ultramafic bodies with a significant nickel-iron alloy content using a proprietory geochemical testing method developed by Bradshaw’s team during the past couple years. Kaiser Bottom-Fish Online is a fee based research portal owned and operated by John Kaiser from his base in Moraga, a suburb in the San Francisco area of California. It specializes in high risk Canadian listed securities and seeks to provide investors with a framework for intelligent speculation. The resource sector is the primary focus for an investment approach developed by Mr. Kaiser which combines his “bottom-fishing strategy” with his “rational speculation model”. A full membership costs $800 annually or $250 quarterly. It provides access to online information resources, commentaries and recomendations.

John Kaiser was born and raised in Vancouver, Canada. He graduated from the University of British Columbia in 1982 with a BA in philosophy and German. He began work in January 1983 as a research assistant with Continental Carlisle Douglas, a Vancouver brokerage firm that specialized in Vancouver Stock Exchange listed securities. In 1989 he moved to Pacific International Securities Inc where he was research director until April 1994 when he moved to the United States with his family. From 1989 until 1994 he was also a registered investment advisor. He worked six months as a researcher for Bob Bishop’s Gold Mining Stock Report before branching out on his own with the publication of the first issue of the Kaiser Bottom-Fishing Report in October 1994. He has written extensively about speculative Canadian issues, is frequently quoted by the media, and is a regular speaker at investment conferences. He specializes in high risk speculative Canadian securities with an emphasis on the resource sector. He is one of the few independent analysts with an in-depth knowledge of diamond exploration.