It’s the End of an Era in Mortgage Rates, Your Best Mortgage Strategy Now 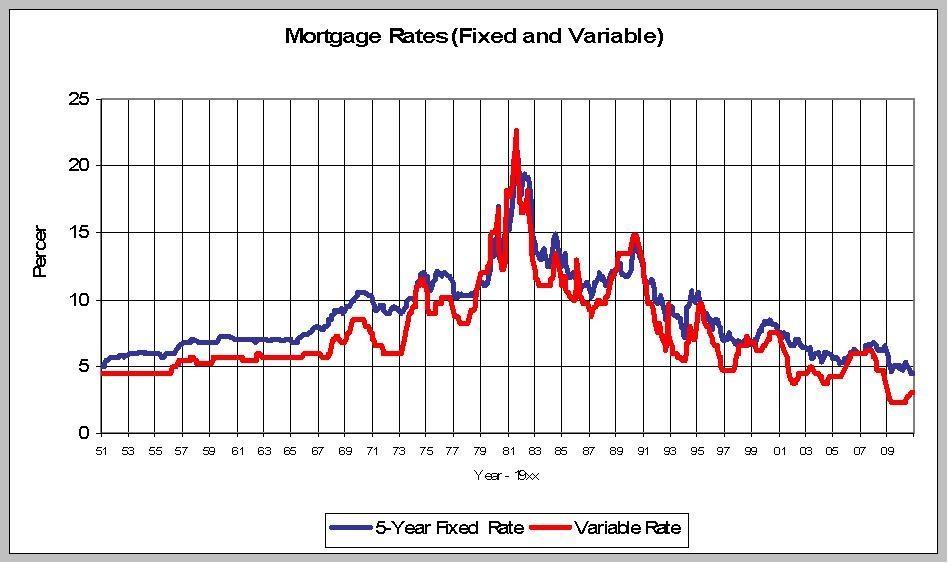 If It’s the End of an Era in Mortgage Rates… What Now?

After 30 years of a declining trend in mortgage rates, many believe we are about to enter a long term trend of rising rates.  We have also experienced a decade of rapidly rising housing prices and there is uncertainty about their future direction.  The paradigm is about to change and the strategies that worked in a declining rate environment won’t apply anymore.

If the 30 year downward trend in mortgage rates is about to reverse and the rapid rise in home prices has reached a plateau, does our home ownership strategy have to change?

The mortgage rate paradigm of the last 30 years is about to change and the strategies that worked in a declining rate environment won’t apply anymore.  To complicate the issue, new mortgage rules and new mortgage products are constantly changing the landscape.  The mortgage consumer today has many choices but for most, there is not enough understanding of those choices to decide what will save them the most money, reduce their risk and give them the flexibility they need.

So, what’s the best move looking ahead?  What strategy is going to save me the most money?  What do the new mortgage rules mean for me?  What options do I need to fit my overall financial plan?

CIBC World Markets’ Senior Economist, Benjamin Tal doesn’t see a short term rise in fixed mortgage rates.  For those who expect bond yields to become inflated when the QE2 tap is turned off on June 30th, Tal says not to worry, the market is already pricing it in.  Just in the last week in fact, fixed mortgage rates have been reduced slightly, following the downward trend in bond yields that have been falling off their recent peak in early April.

This is not to say that any calls for a rising rate environment are out the window.  “Rates Have No Where To Go But Up” is a line scoffed at by anyone who wants take the opposite view.  When the average historical fixed mortgage rate over the last 60 years is about 8.9% and you compare it to today’s street rates of about 4.00%, (up slightly off the recent bottom,) common sense would say the risk is to the upside.  (See graph below.)  When the up-trend will start remains unclear.  Benjamin Tal makes the argument that rates may be on a slow road upward since there is nothing to suggest that persistent inflation is waiting in the wings. As for the prime rate which drives variable mortgage rates, Tal says that we are in an “unusually uncertain market.”  When central bankers don’t know what to do in such an uncertain market, they tend to be more conservative.  Tal believes the Fed is not even dreaming of raising rates in the next 12 months.

What mortgage strategy is best for me when we have a situation where rates are low but there is risk to the upside?  (Which is the reverse of the last 30 years.)  We are also uncertain about when the up-trend will begin.  What does that do for my mortgage strategy?  It depends.  I’ve summed up an argument for the short and long term rate outlook, but what do you do with that model?  It depends on you.  Your situation, your risk tolerance, what stage of the mortgage life-cycle you’re in, your overall financial plan, your cash flow, etc., will determine the strategy that is right for you.

In the most general terms, the biggest decision will be about length of term and the fixed rate vs. variable rate option.  Statistics have been analyzed to compare two five-year fixed rate terms to a ten year fixed rate term to determine which would put you ahead financially.  In the last 60 years, only 10% of the time did a 10 year fixed rate mortgage save money over the five year fixed, largely because the premium you pay on that extra five years of certainty is expensive.  The 10% exception fell in a period just before rates were about to move up rapidly.  In addition, my own analysis of the 60 year historic rates has shown that using a variable rate mortgage at any starting point over a 25 year amortization provided savings between 6% and 20% compared to a five year fixed term.  The question then becomes, if 1981 were to repeat itself, could you handle the payments and the stress?  The good news is that it’s likely to take many years to reach the peak if we were ever to see rates over 20% again.  Your income would hopefully have risen considerably by then as well to cover the higher payments.  You need to ask yourself what you expect your future earnings to be, how sensitive your disposable income is to a change in mortgage rate and if you expect to upgrade or downsize for your next home or stay in your current home ‘forever’.

Another important factor in choosing your mortgage strategy is the stage of the mortgage life-cycle that you are in.  If we assume the uptrend in mortgage rates is about to begin, the following generalities can be made based on a theoretical model of rising, peaking and falling rates similar to what we saw over the last 60 years:

The first time home buyer is often stretching themselves to the limit of what they can afford and therefore are more sensitive to future increases in interest rates.  Locking in an interest rate with a longer term is an insurance policy against rising rates but comes with a premium, (a higher rate with higher payments.)  A ten year term buys assurance of payments and buys time to allow income to rise should rates at the time of renewal increase mortgage payments significantly.

Established homeowners however, would have seen their wages rise presumably with the kind of inflation we see when interest rates are higher.  A future rise in mortgage payments is tempered by a rise in income.  Because affordability has improved over the first term or two, the homeowner is less sensitive to changes interest rates.  More mortgage options are available with respect to length of term and length of amortization.

Entering the housing market at the beginning stages of an up-trend, could mean never having the opportunity to take advantage of the downward phase of the mortgage rate cycle.  By the time your 25 or 30 year amortization has run out, the down trend may not have even begun.  A sustained period of falling rates may not be available again for another generation.

For the do-it-yourself types, a customized mortgage solution can be implemented.   If you are a borrower who understands your situation, know where you are going, and you like to have control over your financial decisions, there are products available today that allow the borrower to partition the mortgage into multiple mortgages.  This does not mean a 1st, a 2nd and a 3rd mortgage.  One registered charge on title can be an umbrella over multiple mortgage products much like a self-directed RRSP.  You may have heard of the 50/50 type of mortgage that is equal parts fixed and variable to diversify interest rate risk.  You can take that several steps further with any mix of fixed & variable, multiple amortizations, multiple terms and (readvanceable) lines of credit all under one charge on the property’s title.

Having said all that, the type of mortgage charge that allows this option has come with some controversy and can cause problems if the pros and cons are not understood ahead of time.

Refinance rules changed on March 18, 2011 and there has been much confusion surrounding this change initiated by the federal government through CMHC.  The new rule lowers the maximum loan amount for a “refinance.”  Prior to the change, borrowers were allowed to refinance their property with a mortgage loan up to 90% of the value of the home.  After March 18, 2011, that maximum was lowered to 85%.

Many questions have surfaced since the change, for two reasons.

First, many home owners purchased with only a 5% down payment, i.e. a mortgage that is 95% of the home’s value.  You might be asking if you need 15% equity in your home to satisfy the new refinance rule once the mortgage term expires.

The second concern is that in some cases, home values have actually fallen in the past few years and may continue, reducing the homeowner’s equity and putting many of them over the 85% mortgage “Loan-to-Value” threshold for a refinance.

Fortunately, at the end of a mortgage term, a “refinance” is not required.  A simple renewal with the current lender, or a transfer or switch to a new lender does not require the borrower to meet the refinance criteria, whether the mortgage is being assigned or a new mortgage is being registered.  To be deemed a “refinance” by CMHC, the risk of the loan would have to increase.  This usually means an increase in the loan amount, amortization or the percentage of the “loan-to-value” (LTV).  If these parameters remain the same and the mortgage remains with a CMHC approved lender, a switch or transfer to another lender can be performed.  Where problems arise are in cases where the borrower wishes to break the existing mortgage in favour of a lower rate but their equity is less than 15%.  The borrower cannot add the amount of the mortgage penalty to the new mortgage (increasing the loan amount) because it would be deemed a refinance since the LTV is greater than 85% and the loan risk is increasing.

Although CMHC allows borrowers to switch or transfer their insured collateral charge mortgage to another lender, (provided that the conditions mentioned earlier are met,) in many cases the original lender may not allow the borrower to switch to another lender.  Lenders are obligated to abide by CMHC’s minimum criteria but they also have the right to impose more restrictive rules on their mortgages.  With respect to the refinance rules and collateral charge mortgages, a lender may be leaving the borrower with less choice when they want to change lenders and be penalizing them with legal fees in the process.  (Keep in mind that people do refinance every 3.5 years on average.  Breaking a 5-year term is not uncommon and will come with a penalty, sometimes very hefty.)

So while a collateral charge mortgage may allow for some very impressive options for customizing your mortgage, borrowers need to be aware of the potential restrictions and expenses should they wish to change lenders.  Entering into a collateral charge mortgage may have little or no impact on the end result, but borrowers need to be aware of the differences.  As a do-it-yourself type myself, I like having the ability to have multiple components to my mortgage to diversify risk and manage my mortgage cash flow over the life of the mortgage.  I also understand however that I may incur additional legal fees or be restricted from changing lenders in the middle of my mortgage term.

With a greater understanding of where we are in the interest rate cycle, where the risks are and what mortgage products are available to fit the external financial environment as well as our own situation, you’ll see your mortgage options and strategies with greater clarity.

Shea Stoney is an independent, licensed mortgage broker with Dominion Lending Centres, Canada’s largest network of mortgage brokers.  He is committed to furthering the public’s financial literary by providing unbiased, balanced information about mortgages and the Canadian mortgage industry.