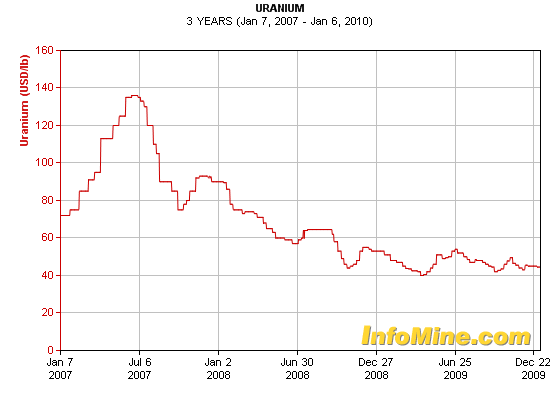 The spot price of uranium quadrupled from 2004 to 2007. When it hit $138/lb, uranium became a certified bubble, which has now burst. For investors, this is the best possible news, of course. Nuclear power is the ultimate alternative fuel, as the French will tell you. You get all the power, 84% cheaper than coal, with none of the politics of rogue nations and none of the greenhouse emissions – Mark Leibovit VRTrader Platinum newsletter of 01/07/10

Uranium – by Alan Knowles of Haywood Securities via TheEnergyReport.com

“China and Kazakhstan were the dominant demand growth (Est. 20 reactor units under construction) and production growth (Est. >35 Mlb U308 annual) forces for 2009, and we anticipate that the trend will continue in 2010. Shifting geopolitical sentiment, particularly across European countries (e.g., Germany, Italy, Belgium & Sweden) has continued to strengthen the commodity’s demand outlook, which will initially comprise the extension or replacement of reactor fleets beyond their earlier planned lifespans.

Globally, support for demand growth is being materialized via the expansion of ancillary industries, particularly heavy industries to accommodate for heightened reactor construction rates, and is an area that is demonstrating consistently greater vertical integration in the sector via continued participation from utilities.

Variable technical, political and financial hurdles have led to several projects either being mothballed, or having their commissioning date postponed over the last several years. Very few projects have escaped these hurdles, which has led to most global production forecasts being progressively lowered over time. Despite these production delays from neo and existing producers, as well as episodic mishaps from the larger mines (e.g., Olympic Dam, BHP Billiton), the uranium price ended 2009 lower (Spot: $44.50 lb-1 U308, Long-Term Contract: $62.00 lb-1 U308).

We believe that much of the downward pressure on the spot price correlated to both the exchange of significant material from funds and other non-producing parties into the largely discretionary spot market (>50 Mlb U308 traded in 2009), and negative sentiment surrounding the uncertainty of the USA Department of Energy’s (DOE) surprise exchange from its uranium inventory for D&D of the Portsmouth Gaseous Diffusion Plant in Ohio.

For early 2010, we believe that the cloud of uncertainty surrounding the DOE’s action will still hang over the market in the short term, but we consider that given our expectations for low growth in uranium production, and continued growth in demand, mainly from non-OECD countries, as well as renewed discretionary budgets for utilities and continued inventory building from China that uranium prices are likely to recover. Given current commodity prices, and our view on the limited number of uranium producers and neo¬producers in 2010, we look towards companies with a demonstrable production growth profile, or with high-grade resources that are being developed and that have expansion potential.”

A few charts chosen at random in each category below. If you want specific Uranium Stock Trading guidance Mark Leibovit of the VRTrader makes recommendations in his VRTrader Platinum Newsletter which also covers Stock, TSE Stocks, Bonds, Gold, Base Metals, Uranium, Oil and the US Dollar – For a trial Subscription of The VR Platinum Newsletter covering Stocks, Bonds, Gold, US Dollar, Oil CLICK HERE The ENERGY Report does not render general or specific investment advice and does not endorse or recommend the business, products, services or securities of any industry or company mentioned in this report.

From time to time, Streetwise Inc. and its directors, officers, employees or members of their families, as well as persons interviewed for articles on the site, may have a long or short position in securities mentioned and may make purchases and/or sales of those securities in the open market or otherwise.

Streetwise Inc. does not guarantee the accuracy or thoroughness of the information reported.

Streetwise Inc. receives a fee from companies that are listed on the home page in the In This Issue section. Their sponsor pages may be considered advertising for the purposes of 18 U.S.C. 1734.

Participating companies provide the logos used in The Energy Report. These logos are trademarks and are the property of the individual companies.