Is This the Final Blast-Off? 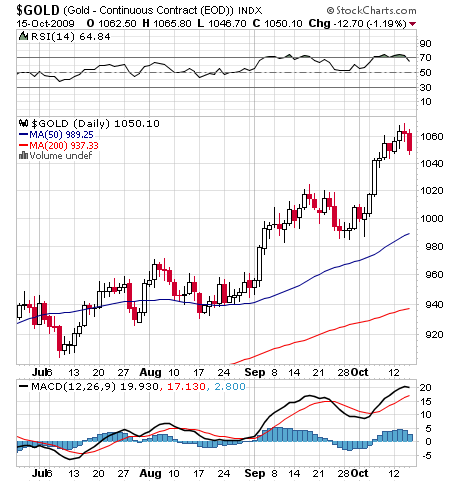 At this point, I am a little reluctant to state this is the final blast-off and that we will not see gold below US$1,000 ever again. Certainly the percentages are with the precious metals investors and it seems gold has nowhere to go but up. As we know, you’re at a level that has been resistance in the past ($1,000), and that area has been resistance for gold for quite some time. And once that level is penetrated for three days in a row then you have a strong probability that the trend is going to continue. In fact, we alerted our subscribers to that very fact! The biggest caveat is that the big, big picture is very tenuous going forward in the October/November timeframe. The powers that be seem to think that the recession is over, but the facts send a different message. Some of these concerns are as follows:

Confidence in the dollar is all we have left. Almost anyone paying attention knows the dollar has lost over 95 percent of its value. This was addressed by this writer about eight years ago in an article titled, “Dollar Dotcom”.

This faith has probably reached its limit. China, Russia, and some of the Middle Eastern countries have all expressed interest in some alternative to the U.S. dollar. Since in real terms the U.S. economy has been declining for several years, the ability for the U.S. to make good on all of the debt obligations be comes highly questionable.

Credit seems to be contracting at a local level and exploding at a bank/financial institution level, as long as your (bank/institution) is favored by the powers in the government. Have any of you tried to get a loan on your home or apart ment building lately? How about a loan for your small business? Credit is con tracting on Main Street but exploding on Wall Street; this does not yield a strong economy going forward.

The U.S. government seems to be progressing into that legislation that we have kept in mind for almost 30 years—the “Monetary Control Act of 1980.” I hon estly have not read it in many years, but to the best of my memory, this “act” provides the ability to monetize almost anything. Have some confederate cur rency you’d like to swap for some Federal Reserve Notes? The bailout schemes are risking the integrity of the U.S. debt previously issued. This is an area to watch very closely.

Derivatives had a profound influence on bringing the system down and yet most of the derivatives in the system are still “open,” meaning these bets are not resolved at this time and the value of many is highly questionable. Deriva tives pose one of the greatest risks to the entire banking and financial system.

Bank failures continue: the FDIC is broke and the balance sheets of many are of grave concern to investors. It is worth your time to check out the safest banks and limit your exposure!

Real estate problems are far from over, in our view. The Alt-A and even conventional mortgages have rollovers into 2010 and 2011 and are equal in size to the sub prime fiasco. This does not even consider fully what is taking place in the commercial real estate sector.

Social Security is simply a wealth-transfer scheme and I have written about it in the past. With tax revenues down, funding of this program and hundreds of other government obligations can only be funded by more borrowing—but from whom?

One of the questions we are getting quite frequently is . . .

If the recession is over officially, doesn’t that, along with the thousand-dollar gold mark, trigger inflation and suggest getting in now potentially (if you’ve been sitting on the fence about gold)?

Investors are always looking for certain signs or indicators to help with their decision-making process. This is especially true in the technical community, and more people are in the technical community today than probably ever before. That is because you have trade stations and all these software programs that anyone can buy and basically run the numbers and come up with a conclusion that gold is break ing out. However, there are no guarantees on this; it’s only a probability.

Deflation concerns still enter into my thinking. Looking at it as I do from a perspective of the real world, things are not really picking up. Not that there isn’t some of that going on, but it certainly isn’t widespread, and this breakout that we had is not very strong.

The easiest thing to say with conviction is, if you’re not in this market you absolutely need to buy physical gold and silver here. Whether it stays above a thousand or drops below is a moot point. When gold goes to 2,000 or 3,000 or more, if you bought it as it broke through 1,000 and then went back under 1,000 for a while, it might make you sad for a day, a week, maybe a month . . . but it’s going much higher in the longer term. So that’s one thing to keep in mind. Many ask, how to buy silver? Secondly, it’s the general equity market or the overall health of the financial asset market. The general market has a great influence on the mining shares, at least on a temporary basis. So that could color your view as far as what to do now. Personally, I’d be much more favorable toward buying the physical metal rather than the mining equities at this point.

Technically, both gold and silver are overbought. The markets can stay overbought for a very long time and continue to move up and up and up in price, being over bought the whole time. So that doesn’t concern me, as far as will it go higher or not, at this point (October 7, 2009). I do want to advise our readers that, if they’re mak ing a decision on what to do now, be cautious. I’m very, very skeptical of what could happen in the October/November timeframe, so look out ahead. I was cautious last year through the end of September; that was a good call, except that it wasn’t for a long enough period. If it had been extended through the end of November, we would have gotten back in with our trading portion of the portfolio at the perfect time, in stead of getting back in a bit too early. Regardless, that position certainly made good gains if you were in the correct mining stocks. Take a look at Silver Standard from the November low of 2008 until present time, going roughly from around the five-dollar level to over twenty. Four hundred percent on this company! Compare that with some of the junior mining companies, and not many have had that type of recovery.

Oftentimes, I am criticized for my “conservative” approach of putting serious money into a serious company. At this point, let the facts speak for themselves. No one in this market is perfect, and timing is extremely difficult but we do our best and can probably hold our own against almost anybody. However, this isn’t day-trading—I’m not a real in-and-out kind of a trader. I’m much more a position trader, where big moves down occur and no one wants to buy gold or silver anymore—that’s the time to jump on board and add to your position. Then at these highs (which we may or may not be at right now, time will tell) I’m a little bit more inclined to lighten up.

You want to sell in the strength. Very few people seem to learn that, because there’s a philosophical adherence to gold as money and silver as money, and I hold those views myself. However, I also hold the view that if you can take a profit on part of your position—which is what we do—you might as well take it, because it’s available to you.

The idea is to stay fully invested with roughly 75 percent of your funds, and to trade with about 25 percent. That is a good approach, because if the market just takes off and blasts upward from here, you still have the lion’s share of your investment and have left only 25 percent behind. Shorter-term trading with the 25 percent can make you feel good.

Markets do move quite a bit and they are quite volatile, so when you do catch a nice move in one direction or the other, both can help you weather these long consolida tion periods. That’s exactly what we did the last time we got a huge move up in the gold and silver price—when gold got up to the $1,000 level or actually beyond it and silver at that time was at $21.00.

I would be much more comfortable saying this is the final blast-off if silver were hitting $21.00 right now as gold is trading over $1,000—that would be confirmation in my book, and I’d be very, very bullish. Unfortunately, silver isn’t leading the charge at this time and that is acceptable. It’s certainly shown some good strength this whole year, but not quite the amount of strength I would expect if we were to see all this inflation pouring into the financial markets. Again, I still suspect that there’s probably some more recessionary, deflationary, depression type of news coming.

It is an honor to be.

Mr. Morgan has followed the silver market for more than 30 years. He wrote the book Get the Skinny on Silver Investing. Much of his Web site, Silver-Investor.com, is devoted to education about the precious metals; it is both a free site and does have a members-only section. Mr. Morgan has just written a free report titled, Silver Fundamentals, Fundamentally Flawed, which can be accessed here: Free Silver Report. To receive full access to The Morgan Report, click the hyperlink.