Is The Gold Trade “Crowded”? 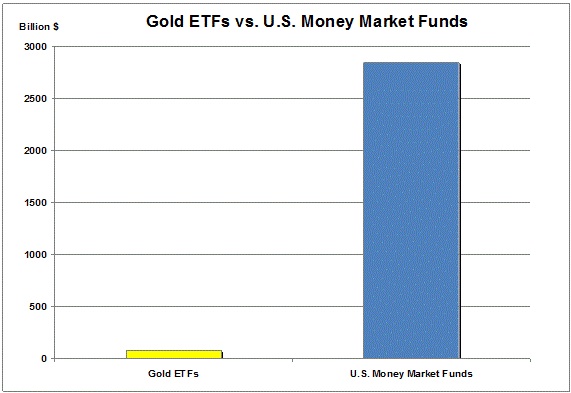 Is the Gold Trade “Crowded”?

It’s true that GLD’s assets just passed the $50 billion mark, and that it’s the second largest U.S. ETF. Yes, mints had difficulty filling orders when the Greek crisis broke. And yes, the gold price is up nine years in a row.

But those who look at statistics like these are missing the other side of the equation. I think it’s less about how much money is already invested in gold and more about what’s available to invest. After all, one could be impressed that China, for example, invested $14.6 billion in gold over the past few years – until you realize they have $2.45 trillion sitting in reserves. According to hedge fund Paulson & Co, if you added up all the money invested in gold ETFs, it would total $78.3 billion (at $1,200 gold). The amount of money currently sitting in U.S. money market funds, on the other hand, comes to $2.849 trillion.

In other words, all the money invested in gold ETFs represents just 2.7% of what is sitting in cash. Put another way, if just 5% of available money market funds ($142.4 billion) were to move into the gold ETFs, it would almost triple the current value.

But what if it’s 10%? And what if Doug Casey’s call for a modern-day gold rush comes to pass?

Those who claim the gold market is crowded will also point to Paulson’s extraordinary high percentage of funds sitting in yellow metal investments. Yes, he’s got a $3.4 billion stake in GLD – but the critics didn’t look under the hood. Most of those holdings are from the fund’s employees (including John himself), not outside investors. Not exactly an overheated trade.

To some, the amount of money invested in gold may “feel” high, but it’s a relative pittance compared to what’s sitting idly on the sidelines, waiting for a reason to move and a place to go. And when you consider that the vast majority of U.S. citizens don’t own any form of gold, this is a market that is the opposite of crowded. There is a lot of money that could hit our sector.

And it’s not just precious metal funds. I interviewed Andy Schectman of bullion dealer Miles Franklin, and Kevin Brekke, our Switzerland-based editor, told me it was the most informative interview we’ve published this year. Why? Because based on what Andy sees week after week regarding supply, he’s come to the conclusion that we’ll see a serious drought of bullion when the average citizen begins to buy gold. Meaning, if you wait to buy until everyone else does, you may find yourself out of luck. And the data I present this month backs up that claim; in fact, you may be surprised at some of the findings