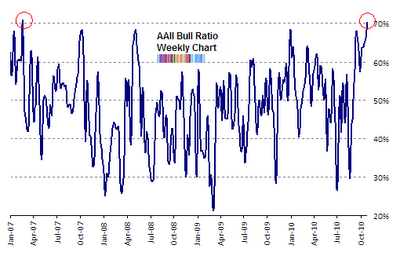 Hallelujah! In a few days the Fed will announce what nearly everyone thinks is the “sure thing” that will propel stocks higher. Supposedly it will be buy the rumor, buy the news, and then keep buying.

Contrarian investors should sit up and take notice as we are finally getting a definitive extreme reading from the weekly AAII sentiment survey. According to the survey, the majority of retail US investors believe that the stock market will be higher 6 months from now: 51.2% were bullish and only 21.6% were bearish.

As I mentioned yesterday, this is the first time we are seeing such a larger bullish camp since May 2008 (53%) – this was one of the intermediate peak retracements during the recent bear market. The S&P 500 topped out at 1426 and fell 15% by mid-July 2008. This week’s survey result is the lowest number of bears since mid-January 2006 (19%). In response the S&P 500 was able to trundle along for a few months basically moving sideways but it peaked in May 2006 about 2% above the January bullish extreme date. From there it declined for the rest of the summer. The result was that basically the first 8 months of 2006 were a wash.

Of course, during strong bull markets it can go much higher but in recent years we’ve seen a range for the bull ratio between 30-70% so this is definitely pushing the upper boundaries. As the examples above illustrate, historically when the AAII survey has been this lopsided towards the bullish camp the equity markets have had a tough time. According to Bespoke, from 1990 onwards, when the bullish levels has been between 50-60% as it is now, the S&P 500 index has returned an average of -0.19% in the following month (49.61% were positive).
Trader’s Narrative also tracks ABC News CCI, conference board sentiment, consumer confidence, fund flows, investors intelligence, ISE sentiment, Michigan consumer sentiment, NAAIM, OEX options, and put call ratios.

Inquiring minds may wish to give the site a closer look.