Posted by ElliottWave International via The Equity Clock 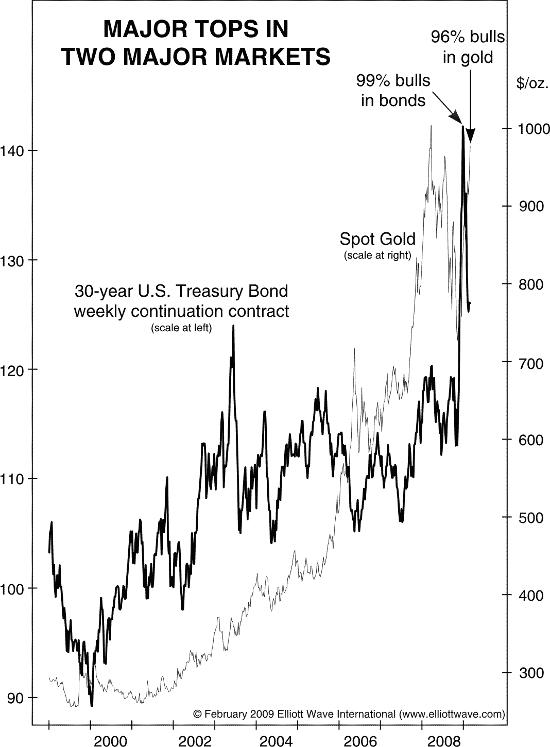 Can precious metals and U.S. Treasury bonds fall together? You bet.

This section will offer a novel viewpoint. Can you imagine a scenario under which precious metal and Treasury bond prices would fall together? Most people would think such an event would be impossible. After all, as we showed in our study of March 2008, bonds do well during deflationary recessions, and gold goes up during inflationary booms. Shouldn’t they be contra-cyclical?

Look at Figure 3 and realize that gold and T-bonds have been going up together for an entire decade. This is completely normal behavior according to our liquidity theory of market movement at the end of credit bubbles and their aftermath, as proposed in Conquer the Crash back in 2002. If gold and T-bonds can go up together for ten years, they certainly can go down together as well.

[Here is a scenario that] is likely to occur later, but since it could happen now, let’s review it. …U.S. Treasuries cannot hold up forever, particularly given the drunken-sailor approach to fiscal management that Congress has practiced over the past century and which has accelerated madly in the past eight years and even more outrageously since last September. At some point, Uncle Sam’s credit rating will begin to slip. According to the price of credit-default swaps on U.S. Treasury debt, it is already slipping.

When the monopoly issuing agent of dollar-denominated debt — the Federal government — begins to lose credibility as a debtor, the U.S.’s great experiment in fiat money will end. Read it here first: The U.S. government is the borrower of last resort. When it can’t borrow any more, the game will be up, because the government’s T-bonds are the basis of our “monetary” “system.”

What will happen when creditors begin to smell default? They will demand more interest. At first, it might not be much: 4%, 6%. But as the depression spreads, spending accelerates, deficits climb and tax receipts fall, the rate that creditors demand might soar to 10, 20, 40 or even 80%. In 1998, annual bond yields in Russia reached over 200% before the government finally threw in the towel and defaulted.

Prices of outstanding bonds, of course, collapse when yields surge. As rates rise, many people will sell other investments to lend at these “attractive” rates. In such a situation, T-bonds would be the primary engine of falling prices, as they suck value from other investments. So, this is another way that gold and bond prices can go down at the same time. …

Why Buy and Hold Doesn’t Work Now
How To Invest During a Long-Term Bear Market
The Biggest Threat to the “Economic Recovery” is …
The Errors in “Efficient Market Hypothesis”
How To Be One of the Few the Government Hasn’t Fooled
MUCH More!
Keep reading this free 118-page eBook now — all you need to do is create a free Club EWI profile.