Huge Gas Find – “Transforms US Energy outlook for next 100yrs” 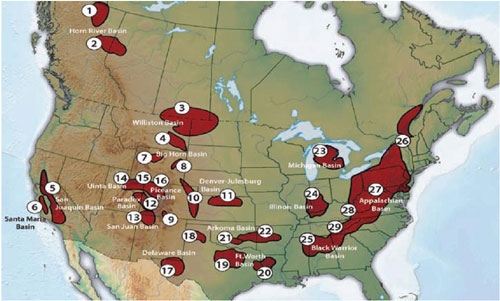 In their exuberance, oil- and gas-industry officials repeat a single refrain when describing the natural gas from Pennsylvania’s Marcellus Shale: A game-changer.

Tony Hayward, chief executive officer of oil giant BP P.L.C., was the latest to gush enthusiastically when he called unconventional natural gas resources like the Marcellus “a complete game-changer.”

“It probably transforms the U.S. energy outlook for the next 100 years,” Hayward said Thursday at the World Economic Forum in Davos, Switzerland.

Until just three years ago, the Marcellus was an obscure name for an obscure rock formation in the backwaters of geological research. Not anymore…

The tipping point came when Penn State professor Terry Engelder demonstrated that the Marcellus holds as much as 500 trillion cubic feet of natural gas the equivalent of total US gas consumption for 25 years. Theres over a trillion dollars worth of gas down there probably much more. Even if the estimate is off by 50% or so (and that 500 trillion cubic foot number might be on the LOW side), Marcellus is a very big resource.

Heres a map showing all of the major shale gas-bearing basins in the US and Canada. The Marcellus is labeled No. 27 and I dont mean in terms of size. As you can see, the Marcellus dwarfs all the others. The breathtaking emergence of natural gas as America’s energy savior was not in the cards. Just four years ago, after Hurricanes Katrina and Rita devastated Gulf Coast rigs and rattled gas markets, energy pundits forecast a bleak winter of short supplies, high prices, and low thermostats.

The vast scale of shale-gas resources has come into focus quickly, and industry officials are touting the possibility of steady supplies for decades to come.

The Potential Gas Committee in Colorado last year revised its outlook of America’s future gas supply – up 35 percent in just two years. The forecast was the highest in its 44-year history.

The Marcellus Shale is the nation’s fastest-growing producing area. Though it lies under five states, about 60 percent of its reserves are in Pennsylvania, according to Terry Engelder, a Pennsylvania State University geologist.

“America’s energy portfolio has undergone a first-order paradigm shift just in the last two years,” he said. “This is such an exciting thing.”

“Two years ago, we were talking about importing gas from the Middle East,” he said. “And now we have a hundred-year supply of domestic gas?”

For companies like UGI Corp. – the Valley Forge energy company that operates regulated utilities in Pennsylvania that sell natural gas to retail customers and operates unregulated subsidiaries that consume and transport natural gas – the Marcellus Shale represents a game-changing opportunity on several fronts.