How Canadian Oilsands Can Go Green – At Less Than $10/barrel 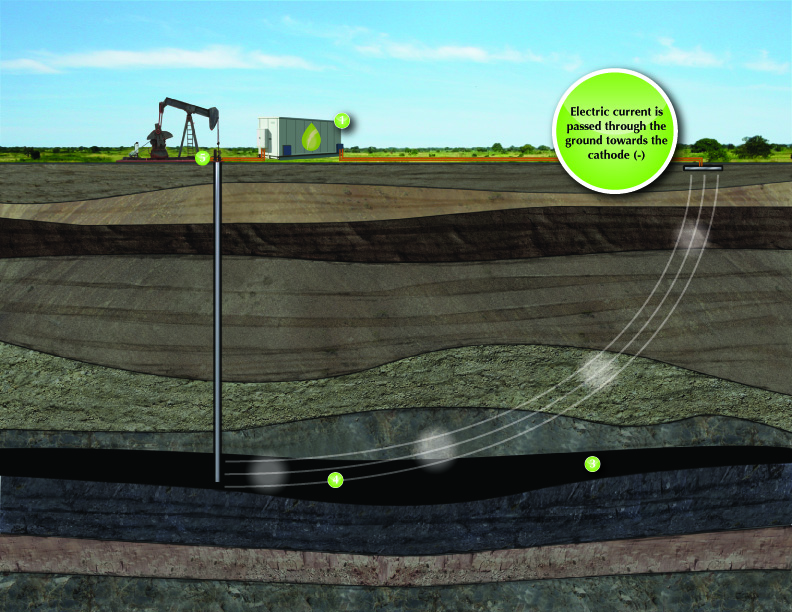 A large part of Canada’s massive oil sands deposits could become one of the most “green” energies on the planet, by using electricity to heat up and break down the heavy oil.  EEOR, or Electrically Enhanced Oil RecoverySM is a new technology being field tested in Saskatchewan by a Canadian junior producer, Deloro Resources.

He adds that EEOR also greatly increases production, which means that both capital and operating costs will be a fraction of current technologies, like SAGD (Steam Assisted Gravity Drainage).

EEOR is simple technology which passes direct current between electrodes at the surface and at the bottom of a well (it can also be passed between the bottom of two wells). This electrical current creates several changes in the oil formation sands.

One is that the heavy oil breaks down by a process known as “cold cracking”. So the heavy minerals and asphalt-like products that make heavy oil “heavy” are cracked, and the oil becomes lighter, increasing the API gravity, which is more valuable.  This also makes the oil flow more easily (the industry calls this reducing viscosity).

Bell says that fine sands and other sands are also affected by the current.  The electrical field helps to create more permeability, which is the ability of the rock or sand to allow oil to pass through it.  So both the new, lighter oil flows more freely in the sands and has more permeability, providing a double bonus.

The electrical current itself, going from the surface to the bottom of the well bore, acts as a driver for oil flow to the well. The electricity also heats up the formation near the well bore itself, allowing the heavy oil to flow better. Once at surface it can be transported via heated lines and put in heated storage tanks onsite.

Conventional technologies must also heat up the oil to get it to flow, usually by drilling two long well bores deep into the formation.  Producers must then wait for the upper steam well to heat up the surrounding oil formation before oil starts to flow from the lower well.

Bell says that energy costs for EEOR are less than $4/barrel, and capital costs are less than $10/barrel on only a 20 bopd well.  Another positive for EEOR is that it works at depths greater than 2500 feet, or 800 metres, while conventional SAGD only works above 2500 feet.

“The technology is not fully commercial yet”, says Bell.  He doesn’t want to get into details but says they are now working on several projects.

“We found Deloro via our partners at Yet2.com.  They didn’t have capital to do a steam project” and the reservoir characteristics were such that Bell thought it was a good fit.

“Capital costs will be a fraction of what they would pay for a steam operation and opex (operating costs) will be less,” Bell says.

EPI and Deloro have made one heavy oil well at Wilkie produce up to 19-25 bopd, and a second well has now been permitted. EPI is paying 50% of the well and will receive 50% of the proceeds until payout, and then goes to a 10% working interest.

EPI plans to use the success at Wilkie and its other projects to extend the use of the EEOR technology into bigger fields with larger working interests.

by Keith Schaefer, editor and publisher of The Oil & Gas Investments. Sign up HERE (60 day, money back guarantee, no questions asked)

I read MANY research reports, and I do a lot of original research – call management teams, talking to my contacts in the oil patch, scour company financials – to find the companies with the best chance to provide investor profits.

But these reports also give me many great story ideas for the blog, that haven’t hit the mainstream media yet.  That’s why you should sign up at the blog to get notified of new stories.

I write the blog and the subscription service so everyone can understand the story. I keep it simple.

Subscribers get a minimum 10 issues a year, and there is often more than one stock presented.

The Oil and Gas Investments Bulletin is a completely independent service, written to build subscriber loyalty. No company ever pays in any way to be profiled.

I am so confident you will find value in my service I offer a 60 day, money back guarantee, no questions asked, for annual subscription purchases.  Please read the sample report I have posted on the website to get an idea of how I profile these fast growing stocks.

Email me with any questions at editor@oilandgas-investments.com