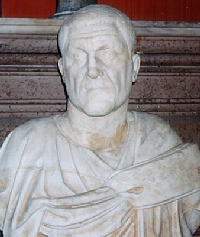 Maximinus I -235-238 AD, the Roman Emperor had what appeared to be an intense hatred of Rome itself. We see the same economic problems back then as we see today. As taxes rose and government expenditure rose debasing currency, things were just nuts.

Maximinus I rising through the ranks as a soldier was a natural selection for government employees demanding money. He took the approach of the government employee. He by no means sought to reduce the pay of government employees, instead he doubled the soldiers’ pay, raised taxes to pay for his troops and declared that all wealth simply belonged to the emperor .

Maximinus I had networks of spies, who were people eager to hunt down the rich and despised them for their wealth. This network of spies indeed was not much different where today in the United States the government offers a reward of 10% of someone’s property if it proves they did not pay their taxes. This is precisely what Maximinus was doing, and it undermined the economy to such an extent, that wealth was hoarded being driven underground and the VELOCITY of money collapsed. No doubt, unemployment rose sharply under such conditions. Commerce was deeply affected as a depression set in.

Maximinus I (235-238AD) is said to have been the first soldier who rose through the ranks to become Emperor. He was also from Thrace in Greece and is said to have been a shepherd before joining the army. With Hindsight, many considered that he was really a barbarian whose parents merely crossed the border into Thrace unable to rationalize his behavior as a Roman citizen. This was largely a position taken to explain what appeared to be an intense hatred of Rome itself. Under Severus Alexander, he had risen to command the Army of the Rhine. Severus and his mother were murdered while in Germany at Moguntiacum (Mainz). The Rhine Army then proclaimed Maximinus I Emperor of the Roman Empire.

Obviously, the Decline and Fall of Rome was underway. When an emperor tried to reduce government expenditures, the troops rioted as we see in Greece today but back then they murdered the presiding emperor such as Pertinax (193AD) and Macrinus (218AD). We see the same economic problems back then as we see today. It was in 238AD that a group of landowners rebelled against the rising imperial taxation killing the tax collectors. As taxes rose and government expenditure rose debasing currency, things were just nuts. Maximinus I rising through the ranks as a soldier was a natural selection for government employees demanding money. He took the approach of the government employee. He by no means sought to reduce the pay of government employees, instead, he raised taxes to pay for his troops and even went much further. Maximinus’ three actions against the people were very Marxist in those days regarding ALL wealth now belonged to the state! He was desperate for money and those rich bastards were going to cough up everything!  Maximinus had doubled the soldiers’ pay, and the military needed additional funds for road-building to maintain control. He also appropriated ornaments from public places and temples. Can you imagine the government coming into your church and taking anything of value to pay for government employee wages? This led to a great tumult resulting in many massacres in defense of religion. In opposing those who had supported Emperor Severus Alexander, Maxininus I ordered Christians to be persecuted.

Maximinus I used Conspiracy, a crime still used by the United States yet abandoned in Europe, Russia, and even China. Conspiracy is the law of tyrants, for it allows the conviction of someone for a crime they did not commit, nor even attempted to commit but you claim they “intended” purely as a mental state to commit in the future. Maximinus I engaged in legal persecution. Thus, the criminal law became (1) committing the act, (2) attempting to commit the act, and then (3) there is Conspiracy which is claimed you have only “intended” to commit the act in your mind, which cannot be proven and typically requires extorting a confession by force. Using conspiracy, the law of tyrants, Maximinus I effectively tore the Roman economy apart at its seams. He charged a noted Senator by the name of Magnus, with conspiracy against the emperor, found him guilty, executed him, and then arrested 4,000 others claiming they conspired with him to depose him. He then used the criminal law to claim they committed a crime of conspiracy, and that of course justified confiscating all their property as well.

The second act of Maximinus I was to declare that all wealth simply belonged to the emperor in a communistic fashion. What took place, however, was the complete breakdown of society. Wealth was driven underground and money now was hoarded causing VELOCITY to collapse as cash flow in circulation vanished and hoarding prevailed. This caused the economy to implode as commerce ceased, fostering an economic depression, which naturally reduced tax revenues. Maximinus I did not stop with simply private wealth. Maximinus I ordered the wealth of all temples to be confiscated as well. Countless died in defense of their religious beliefs. Not even the gods were respected by Maximinus I whose view was they never answered prayers because they did not exist.

Where there had once been golden statues of former Emperors, here also, Maximinus ordered their seizure so they could then be melted down. The Rule of Law collapsed and Historia Augusta tells us that he ”condemned all whoever came to trial”and that he “reduced the richest men to utter poverty.” The USA conviction rate today is about 99%. The courts abandoned the people as they have done so again in the USA. There was truly nothing left. Nowhere could a person turn for justice. With the people under siege from their own government, they hoarded wealth to conceal it from state spies. This caused a collapse in VELOCITY of money flow as commerce foundered sending the economy into a Great Depression spiral. This was open warfare against the possession of wealth.

When rebellion began in Africa against the imperial taxation of Maximinus I, the people proclaimed two men Emperor in 238AD, Gordian I and Gordian II. Both were from a wealthy Roman family that held large tracts of land in Africa and were thus directly affected. Both men had been former Consuls, and thus were highly respected among the people. Gordian I was 81 years old. He accepted the Purple reluctantly, only with his son as co-emperor. Both were quickly confirmed by the Senate of Rome itself, which clearly now marked their break with Maximinus I. However, the governor of Numidia was loyal to Maximinus I and marched on Carthage where the Gordians were and defeated the younger Gordian in Battle causing the father to then committed suicide. Their reign lasted only three weeks during the month of April 238AD.

Maximinius I was now marching upon Rome itself given the Senate’s support for the Gordians. He had never bothered to even visit Rome, giving support to these who claimed he was a barbarian. Maximinus’s reputation was one of a ruthless and cruel man that struck fear in hearts of the people. Maximinius had networks of spies, who were people eager to hunt down the rich and despised them for their wealth. This network of spies indeed was not much different where today in the United States the government offers a reward of 10% of someone’s property if it proves they did not pay their taxes. This is precisely what Maximinus was doing, and it undermined the economy to such an extent, that wealth was hoarded being driven underground and the VELOCITY of money collapsed. No doubt, unemployment rose sharply under such conditions. Commerce was deeply affected as a depression set in.

The Senate of Rome was now in a state of panic. With the defeat of the Gordians, they knew Maximinus I would now march against Rome itself and seek vengeance against the Senate all their lives and property would be forfeit. Panic swept through the Senate and thus they quickly now enacted legislation declaring Maximinus I was a public enemy out of desperation. However, the Senate then elected two of their own members to defend against Maximinus I. They then elected Pupienus (238AD) and Balbinus (238AD) as joint rulers.

Pupienus had risen through the ranks of the military and was selected to take an army and head north to confront Maximinius I who was now marching upon Rome. Pupienus was adopting a scorched earth policy. Maximinus I decided to take the northern city of Aquileia. This siege delayed his advance. Meanwhile, Rome was in a stage of complete panic. Balbinus stayed in the city of Rome, but the mob was rioting fearing the worst. Historia Augusta tells us Balbinus is said to have issued “a thousand edicts” that were just ignored by the people who even stormed the imperial palace, but were rebuffed. Anyone suspected of being rich or hiding money was attacked, their homes plundered, and were murdered on the streets. The rich became the hated enemy as under socialism/communism and Maximinus’ policies now justified these actions as supported by law no matter how unjust. There was no Rule of Law. Rome nearly ended in a sea of blood motivated by class-warfare.

Maximinus I was now laying siege to Aquileia where people defended the city with their lives. There was no debate. Legend even tells us that the women cut their hair to make bow strings. The citizens scorched the surroundlng land to deprive Maximinus of supplies. To the shock of everyone, the valor of the common citizens could not be overcome by the troops of Maximinus. Thus, his own men, humiliated by the common citizens of Aquileia, now entered the tent of Maximinus and murdered him. To demonstrate their new loyality to Rome, they cut-off his head and sent it to Rome. This was the first time that the Senate showed any courage since the age of Augustus (27BC-14AD). In their celebration, the Senate spoke unwisely and insulted the soldiers while patting themselves on the back.

The army was outraged. In retaliation, they dragged Balbinus and Pupienus from the palace and executed them on the streets of Rome. They then hailed Gordian III (238-244AD) as the new emperor. Some soldiers stormed even the Senate. But the senators were now all armed and struck down the soldiers as they entered the chamber. It appeared Rome would be plunged once again into civil war. But the soldiers accepted Gordian III provided he ruled alone despite the fact he was about 13 to 16 years of age.

Nevertheless, Maximinus had seriously disrupted the entire economy. The VELOCITYof money came to a near halt as spies were everywhere and people were afraid to show any wealth at all. This economic implosion was similar to the Communists taking Russia or China.

Portraits of Maximinus I

Due to the speed of events that brought Maximinus to power, the moneyers of Rome did not know what the new emperor looked like. At first, a stylized portrait similar to Severus Alexander was used. This is usually found with the reverse of “VICTORIA AVG” pictured above. Finally, as the image of Maximinus became known, we find that the portraiture on his later coinage is drastically changed showing the emperor in a much more realistic style.

Monetary History of the World

by Martin A. Armstrong