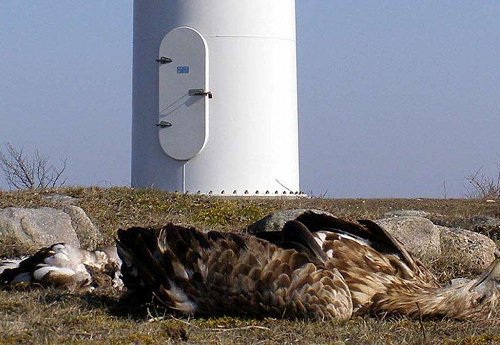 Not to different from Solyndra which got $535 million of taxypayer dollars in 2009 only to file for bankruptcy in Sept. 2011.

Doesn’t seem that Government should be trying to pick winners does it? It gets even stranger with Wind Power.

“Over the past two decades, the US federal government has prosecuted hundreds of cases against oil and gas producers and electricity producers for violating some of America’s oldest wildlife-protection laws: the Migratory Bird Treaty Act and Eagle Protection Act. Despite laws that can result in a fine of up to $250,000 and imprisonment for two years, the Wind Industry has never been prosectued despite graphic examples of vastly more rare birds being killed by windmill projects. For example, last June, the Los Angeles Times reported that about 70 golden eagles are being killed per year by the wind turbines at Altamont Pass, about 20 miles east of Oakland, Calif. A 2008 study funded by the Alameda County Community Development Agency estimated that about 2,400 raptors, including burrowing owls, American kestrels, and red-tailed hawks—as well as about 7,500 other birds, nearly all of which are protected under the Migratory Bird Treaty Act—are being killed every year by the turbines at Altamont.”

Good heavens, seems there’s a double standard in effect for Wind Projects (odd enviromenalists would overlook this) and a giant sinkhole for tax dollars in Solar Panel Manufacturers.

Pictures of GOLDEN EAGLES THAT FACE EXTINCTION IN U.S. AS NUMBERS PLUMMET killed by windmills