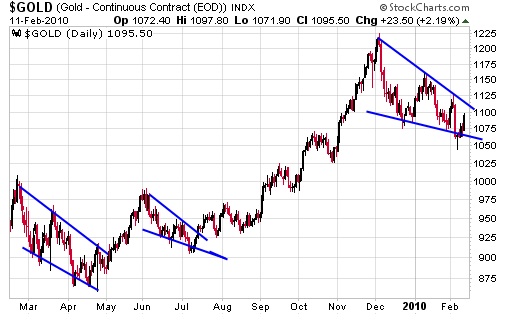 The technical picture for gold has improved dramatically. A breakout from a falling wedge is one of the best technical patterns for bulls and it appears we’re on the verge here in gold. Physical demand has been very strong during this “paper” correction. The commercials on the CrimeNex (Comex) have aggressively covered in the last two weeks and once again have fleeced the speculators for the umpteen time. Two consecutive closes above $1,125 should put the correction fully behind us. I continue to believe there are “two” gold markets; the physical market worldwide and the paper market on the CrimeNex. The days are numbered for the paper “hangers” as real demand for gold continues to grow despite an overwhelming number of gold perma bears and chicken bulls that dominate the financial services industry and the media. I can’t wait to hear their latest excuses when we go to new highs later this year.