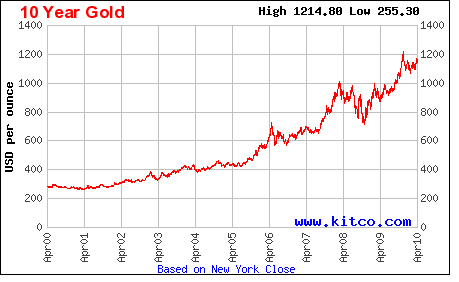 Gold $1,130 – Since just above $300, gold has climbed a wall of worry and denial. You wouldn’t need more than your hands and maybe a few toes to count the number of “experts” who have stayed the bullish course along the way. The road is littered with former gold bulls and perma-bears, all of whom predicted gold’s demise (many more than once).

Once again we find ourselves at one of those speed bumps…only this time the supposed land mine is one of those claims that just makes you laugh at the extent some go to in futile hopes of stopping the mother of all secular gold bull markets. The latest charade is the fear Paulson will have to sell his gold holdings because of the Goldman charges. While I would expect such nonsense from the “Senior Analyst” (he ran out of legitimate excuses hundreds of dollars lower ago), I find it amusing (but not surprising) that this lame excuse has caused some real grief.

Hello? Do you honestly think the rise in gold has been thanks even in part to Paulson? Sure, he has purchased some credible positions in it, but I highly doubt without him having done so we wouldn’t be at this point anyway. Oh, and by the way, even if his fund was somehow force to sell (the chances of which I believe are slim and none), it’s my understanding that there’s a three-year freeze on redemptions.

If I told you once I told you a thousand times, the financial world and the media that covers it hate gold. It will never be widely accepted because ownership of it flies in the face of what makes their world go around – stocks and bonds. This secular gold bull market takes no prisoners and this time will be no exception. I believe the latest naysayers (not the permanent ones like you know who) will end up joining an ever-increasing list of bears who end up mauled by the big and bad gold bull.