Gold over $1100 – does it finally have everyones attention? 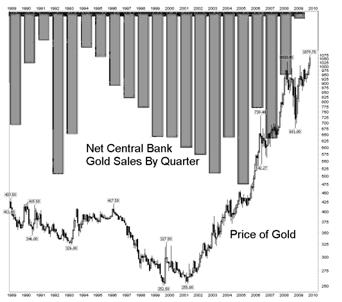 Gold.. Do we finally have your attention?

The past two weeks have brought two massive paradigm shifts to a Gold market that has been morphing literally on a daily basis for the past few months. During this time, the pundits and purveyors of misinformation and tripe have done their best to ‘student body left’ Gold back into obscurity as an ancient, barbaric relic. They certainly get an ‘A’ for effort. Now that Gold has made its debut above $1100 an ounce, they’ve switched their tactic and are now calling it a bubble.  We’ll deal with why this cannot be the case in a bit.

For the past 9 years now, students of history and common sense have been literally shouting from the rooftops that Gold was the place to be as the monetary tradewinds shifted back in 2000 and the fiat inflationary cycle began to go parabolic. While the multi-trillion dollar deficits might be a surprise to many, for those who understand how these things work, it is just a mundane repetition of history and yet another confirmation that man cannot alter the laws of economics or his own intrinsic predilection to ignore events past.

From 2000 up until recently, there was a constant battle going on. Central banks and the IMF would sell off their physical Gold to suppress the price. Between 1999 and 2002, Gordon Brown, then England’s Chancellor of the Exchequer made the extremely wise decision to sell a good chunk of Mother England’s Gold (395 tonnes) in the $275-$300/oz area. The people were so enthralled by this obvious economic genius that they made him the Prime Minister. All sarcasm aside, this was only one prong of the tactic to suppress Gold prices. The second prong consisted of large New York and London banks mercilessly shorting Gold in the paper futures markets. For most of the last nine years, the bulk of these futures contracts were rolled over or settled in cash; taking delivery wasn’t really en vogue. There have been many people such as Jim Sinclair working hard in the trenches to educate people on the merits of taking delivery and fighting the cartel by taking their playing chips off the table. Gold in your possession cannot be leased out by a central bank to various third parties, nor can it have futures contracts written against it. Despite even these herculean suppression efforts, the price of Gold made the journey from $275 to $940 in fairly short order. Surely, there were many gut checks in there; days when the metal lost 5% and the pundits would scream the bubble had burst and it was all over, now please buy some mortgage backed securities. There were some epic struggles like the Battle for $700 shown below.

Through the past nine years the game was played under the rules of central banks and the IMF. In the past two months, countries, large players, and even Gold producers have turned the game on its head. Suddenly everyone wants physical metal, not paper promises. And don’t give us the 90% bars either; we want the good stuff. Suddenly, there are instant buyers for IMF sales that were previously guaranteed to suppress prices. Suddenly an IMF sale sparks a rally to a new all-time high. China tells NY and London banks to take a long stroll off a short pier by issuing a directive to its state banks to walk away from commodity derivatives contracts. And, even more telling, central bank selling has been dropping steadily over the past few years and has been nearly nonexistent in 2009.

And finally, Barrick is closing its infamous hedge book. What was once a 20 million ounce boat anchor on the price of Gold has become a multibillion dollar boat anchor around Barrick’s neck and they’ve finally had enough. The book, now around 3 million ounces will be closed by next year according to Barrick boss Aaron Regent.

Oddly enough, it is not the collapsing US Dollar that is driving this decision, but rather a realization that Gold production likely peaked in 2001 and that even a tripling in exploration budgets across the mining sector has yielded precious little in the way of new discoveries. During this entire time period, demand for Gold has been rising consistently, thanks in no small part to the continual abuse of paper currencies by governments around the globe. The existence of serious supply-demand dislocations immediately rules out the prospect of a speculative bubble. Granted, there are plenty of smaller players who are dabbling in Gold without the slightest bit of understanding as to why they’re doing it. The next correction will undoubtedly send many of them running back to mainstream newsletter writers demanding a refund. After all, they were supposed to be living on the beach in 6 months; the advertisement said so!

The shattering of the old paradigm as it relates to Gold is very similar to a paradigm that was shattered with regard to stock investing nearly a decade ago. In that case, the conventional logic was that the market always went up in the long run. And for 18 years, that had absolutely been the case. Even the crash of 1987 hadn’t done much to derail the bull market. However, when we crossed into the new century, the paper paradigm changed with the major indices going NOWHERE in the past 9 years and change. Yet many conventional financial professionals are still investing as if it were 1995 then blaming the markets for client losses when they should be blaming their own inability to see that our world has changed dramatically.

Unfortunately, another of the very negative sides of the attack on Gold have been the ad hominim attacks on proponents of Gold-backed currencies and those who promote the reality that Gold is in fact real money. The attackers use the term ‘Gold Bug’ to paint a picture of little men sitting in fallout shelters wearing tinfoil hats with stashes of food, water, and enough weapons to make the debate about Iran seem pretty foolish. That just isn’t the way it is. Simply put, a Gold bug is someone who understands Gold’s historical role as money and seeks to educate others in this regard while protecting their own assets from the abuses heaped on paper currencies by their custodians.

So today I, an admitted Gold bug, ask: Now… do we finally have your attention?