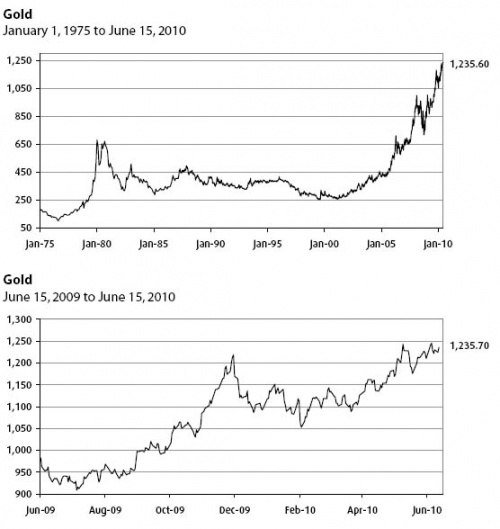 The Oldest-Established Store of Value Moves to Center Stage Over the decade that we have been advocating exposure to gold and gold mining stocks, we have been routinely subjected to basic skepticism: why gold? Isn’t it irrelevant?

If the dollar doesn’t look good, I can buy the yen.

If the yen looks bad, I can buy the euro.

Besides, what good is gold? Other commodities are useful and, in most cases, absolutely necessary.

But gold hasn’t been needed for central banking for nearly a century, and, apart from jewelry or for providing Mafiosi with a convenient vehicle for storing their wealth, it doesn’t fulfill any purpose that sound paper money can’t do better. (This, of course, assumes the availability of sound paper money.)

In answering a question about gold’s rather dramatic return to store of value status with the portfolio managers of one of Canada’s largest public sector pension plans, we took a new tack:

“The longest-established text-based religion in the West is about the God of Jacob—His works and His worship. For roughly five thousand years, a believer summed up his credo by saying, ‘I believe in God.’

“But when this credo arrived, it had to share space with an alternative belief system that was around for thousands of years before the Judaeo-Christian era began. A believer in this system summed it up, ‘I believe in Gold.’”

Two systems—similar professions of faith. Neither could prove to a skeptical rationalist why its tenet was valid.

As we have thought about this space-sharing and competition between spiritual and temporal beliefs, we have mused that large-scale skepticism about both of them occurred only recently. Darwinism, paleontology, and astrophysics combined to drive the Old Testament explanation of history out of the temples of scientific learning. Keynesianism came along to drive gold from the temples of the central bank money-changers in favor of the printed paper promises of politicians.

Why is gold back among serious, respectable investors?

Why is it now available through ATMs in the gold market of Abu Dhabi?

Is it a return of inflation?

How could that be, when, as the wise David Rosenberg routinely scoffs, “What inflation?”

Indeed, Canada reported its first negative CPI in 44 years, the US, its biggest decline in 18 months, and across the OECD there is, (at least for now), more fear of deflation than inflation. Despite astonishingly high housing subsidies that are swelling the already-bloated US national debt, US home prices remain soft, and foreclosure is not only no longer a disgrace—it threatens to become almost chic. (A recent poll of homeowners disclosed that 55% of those with mortgaged homes believed their house was worth less than their mortgage.) Not all the news is bad: The cost of TARP has turned out to be far less than feared: the cost of saving the US from house price collapses on a scale that would unleash a Depression—including the mind-boggling costs for keeping
Fannie, Freddie and the Federal Home Loan Bank alive and lending, and the various cash subsidies to buyers—is many orders of magnitude above the Wall Street bailouts.

If the only thing keeping house prices from collapse is a boost in the national debt bigger than the total cost of all the US’s foreign wars since World War II, then how can inflation be a threat?

Yes, some industrial and food commodity prices have shown some inflationary tendencies, but, with the exception of coffee, cocoa, iron ore and metallurgical coal, prices have been sagging recently—although remaining far above Lehman lows.

Interest rates remain in the zero range, which would be a sure sign of inflation on the horizon if there were projected increases for anything significant other than wages and benefits for government employees.

Although the Fed’s response to the Crash was the greatest goosing of its asset base in history, raising fears among the putatively paranoid that a new Weimar was being born, in recent months the Fed seems dedicated to proving that its previous promises of piety were sincere. Based solely on the numbers, Bernanke almost seems to be willing to risk outright deflation: So what makes gold so attractive now?

And who is buying it.