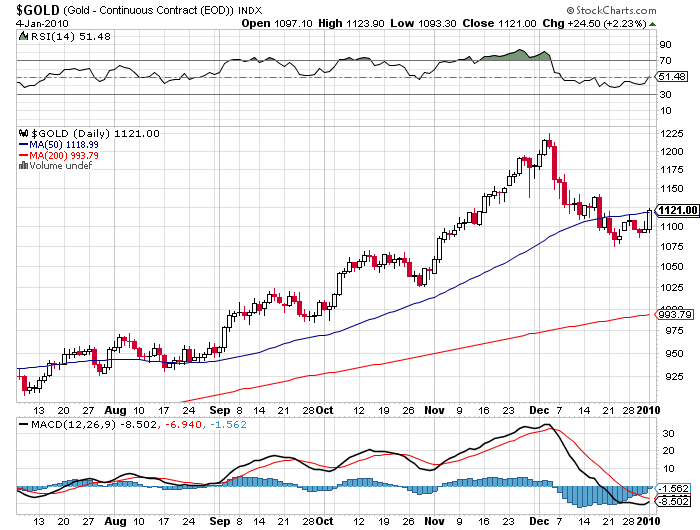 GLOBAL INVESTING GURU and publisher of the infamous Gloom, Boom and Doom report Marc Faber says gold is cheap at $1100 per ounce, reports Commodity Online from its Singapore office.

Faber advises prudent investors to Buy Gold at this current price so they can reap rich dividends in 2010.

In his first New Year comment on the price of gold, the US Dollar and commodities more broadly, Faber said that the most interesting currency that people should invest now is gold as the US Dollar is on a bearish run.

“Gold remains the best bet as a currency these days because of the fact that the yellow metal supply is extremely limited. Gold at the current price of $1110 per ounce is less expensive than when it was sold for less than $300 per ounce years back…” “A company’s stock could be less expensive at $100 than when it was selling for $10, because earnings growth has outpaced the appreciation of the shares and therefore its price/earnings ratio has declined. So gold could be cheaper at the current price than when it was at less than $300 because of the explosion of foreign exchange reserves in the world, zero interest rates, the huge debt overhang, and the expectation of further money printing.”

According to Faber, global reserves of gold have grown from about $1 trillion in 1995 to over $7 trillion today. “Therefore,” he says, “the share of gold in the world’s official reserves has declined from 32.7% in 1989 to a current record low of 10.3%,” he points out.

In this latest interview Faber said that he is still puzzled by the deflationists, who cannot understand how the explosion in foreign exchange reserves over the last 15 years is a symptom of a massive monetary inflation. “Ergo, I could argue that gold is now actually less expensive than when it sold for around $300 per ounce,” he said.

Faber said that central banks in emerging economies keep only a tiny fraction of their reserves in gold. “Eventually, I would expect them to follow the example of the Reserve Bank of India (RBI), which recently bought 200 tonnes from the IMF for $6.7 billion,” Faber pointed out.

“Now, just consider what the impact would be if China were to increase its gold holdings from presently less than 2 per cent of its $2.2 trillion reserves to 6 per cent or 10 per cent. Each 1 per cent increase in gold weighting would mean gold purchases of more than $20 billion, or nearly 600 tonnes,” said Faber, forecasting that Gold Prices may go from $1100 per fine ounce to $1500 or even $5000.

Contrasting gold with the US Dollar, he added that he “would not invest more than a sliver” of his wealth “into something without intrinsic value, something whose positive value is based on nothing more than a set of self-confirming beliefs.”

Faber said that he is not a perennial gold bug. But “when governments spend far more than they collect in taxes (large fiscal deficits), and when central bankers engage in reckless monetary policies and, instead of treating the causes of the problems (excessive debt growth), treat the symptoms (deflationary forces), gold as a currency does make a lot of sense.”

Looking to Buy Gold today? “If there’s an easier way, I’ve yet to find it,” says one BullionVault user…