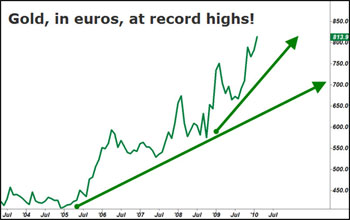 Despite the fact that it’s entering a period of short-term weakness and may even fall to just below $1,000 an ounce …

Everyone — and I mean everyone — should consider owning at least my top three gold mining shares.

Why? Here are just a few reasons …

A. Because the financial crisis is far from over. Indeed, it’s now in a new phase — a period where governments effectively go bankrupt, either by defaulting on their debt obligations outright, or, on the sly by devaluing their currencies.

B. Because our own Federal Reserve is seemingly dead set on a weaker U.S. dollar as well, no matter what the costs to the American people.

C. Because the U.S. government is flat broke, yet it continues to spend money as if it grows on trees (or more accurately, like they can print more of it at any time).

D. Because China is beginning to do what everyone from Main Street … to Wall Street … to Pennsylvania Avenue fears most: It’s starting to dump its holdings of U.S. Treasuries, dumping more than $34 billion in American IOUs in December, slashing its holdings for a second straight month, down a total of $45 billion from last November.

E. Because there’s a great crisis in confidence brewing around the globe, where investors everywhere will eventually seek safety in gold — the one asset that has always, without fail, protected one’s wealth from the mismanagement of the state by the powers-that-be.

If you look closely at gold, you’ll see that even when the price of gold is weak in U.S. dollar terms, in terms of other currencies, it is often roaring to the upside.

Moreover, the price of gold in euros has almost doubled in the last five years, outperforming nearly every investment on the planet. But then, after some consolidation and sideways trading in the latter part of last year, gold then exploded higher again, forming an even sharper uptrend than the previous liftoff.

The important concept to understand: When looking at an asset or asset class today, it is simply not enough to look at it in terms of one currency, particularly the U.S. dollar.

You must look at market action from additional perspectives, namely, other major currencies, to determine how that asset is performing on an international basis.

In this case, the action in gold in terms of euros is very revealing. The new record highs in euros tells me — without one single shred of doubt in my mind that …

2. When the euro currency starts to strengthen again, and the U.S. dollar starts to weaken again — gold in U.S. dollar terms will begin to look very much like the chart above. With the yellow metal blasting off to new record highs, probably doubling, just like it did in euros, and eventually reaching my minimum target of $2,300 an ounce.

All this is why I feel compelled to remind you, that even though gold is a bit weak right now in U.S. dollar terms — given everything that’s happening in the world — gold and gold shares are just about the best investment you can have in your portfolio to ensure your financial health and that of your loved ones.

In previous columns, and in more detail in my Real Wealth Report, I’ve often reviewed what kind of physical gold holdings one should have: Ingots and bars, and gold Exchange Traded Funds.

But today I want to review my top three gold mining shares. These are shares I believe everyone should own, and for the long haul.

Bear in mind I cannot give you precise buy prices, timing signals, risk-reducing strategies, nor instructions on when to grab profits. All those specifics are reserved for active subscribers to Real Wealth Report. I’m sure you’ll understand.

Nevertheless, here they are …

One of my favorite miners and one of the best managed miners in the world. Agnico has a long, stellar reputation of not hedging its gold reserves or production, meaning it can fully participate in gold’s long-term bull market.

Another one of my favorites, this blue-chip gold miner is a low-cost, debt-free, unhedged gold producer with 10 mining operations, and 22.7 million ounces of proven gold reserves.

Kinross entered the gold mining industry as a junior producer in 1993. Throughout the rest of the 1990s the company thrived while many of its peers fell by the wayside as the price of gold continued to fall.

These are just my top three gold mining shares.

There are several more. Details, including how to trade them even for short-term profits can be found in my Real Wealth Report.  To subscribe, consider a one-year membership. At just $99, it’s a bargain!

Best wishes for your health and wealth,