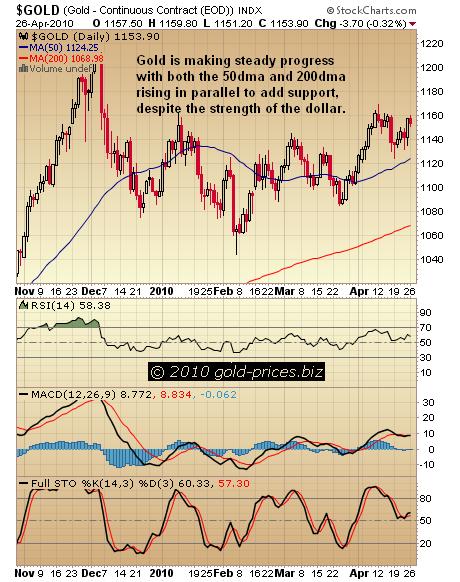 The bull market in gold is 10 years old and is still strong. It has not yet undergone its speculative third phase. What to do?

I could blab for days about what we might do or what might happen, but why not be honest and skip the blabbing? What have I personally done? I’ve got a house fully paid for, I’ve got two cars that I bought for cash, I’ve got a wife who is smarter than I am — our assets are about one-third gold, one-third cash, and our home plus two town-houses. – Richard Russell of Dow Theory Letters

The following article from the Gold Prices Newsletter Gold prices are currently standing at $1153.90/oz having been through a period of consolidation despite the US Dollar making good ground. We have warned in the past that this is a volatile sector and the first few months of this year have been turbulent, however the trend is still up so we are sticking with it.

As the above chart shows gold prices are making steady progress with both the 50dma and 200dma rising in parallel to add support, with the technical indicators more or less in the neutral zone.

The cast of performers who have featured in our articles over the past few months has included Ben Bernanke, Grandich, Soros, Nadler, Casey, Rule, Embry, Rogers, Yellen, all adding to the rich tapestry of the precious metals landscape. We have also looked at a few companies that we don’t have an investment in but are taking an interest in, such as Lihir Gold, Centerra, Oceanagold Corporation, Iamgold Gold Corporation, etc. And, in response to requests from our readership we have started a premium options trading service which has been well received with new investors signing up everyday. The cost for this service is $99.00, however, the last 8 trades have all generated a good profit giving our subscribers reason to smile. The attrition rate, the number of investors who terminate their subscription, is less than 2% which tells us that they are happy to stay with us. Many thanks to those of you who have joined us on this little adventure we really do appreciate your support.

Our portfolio as been updated as follows:

Randgold Resources Limited (GOLD) On the 18th of June 2008 we bought Randgold Resources Limited for $37.65. This stock quickly rallied to $55.00 before being caught in the ensuing sector sell off to trade as low as $27.70, on the 28th May 2009 we sold our entire holding for an average price of $68.69 for a return of 82.44%. This is a quality gold producer so we waited patiently for a suitable entry point at cheaper price levels as per our post “ Randgold: As Good as it gets” when Randgold traded at $58.71 and we wrote the following:

If you made a purchase at this point then well done, however we held out too long and missed the buying opportunity by being too tight, rats! Randgold is now at $81.41.

Agnico Eagle Mines (AEM) we originally paid $30.88 and it now stands at $61.16. On 31st January 2008 we reduced our exposure to this stock and sold about 50% of our holding for an average price of $63.27, locking in a profit of 104.8%. On the 24th July 2008 we bought again at $59.17 doubling our position with the average cost now standing at $45.03. Due to mine commissioning/start up problems the stock was aggressively sold off and closed recently at $57.02, having suffered through dramatic oscillations, however, the old buzzard has started on the road to recovery and last traded at $61.16.

On the 25th January we bought some stock at $53.24 with the intention of making a short term trade, this move is currently up 15% but we had hoped for better. We may have to settle for a small profit shortly, but we are under no pressure to sell and we are expecting gold prices to move to higher ground.

Silverado Gold Mines (SLGLF) We have a token amount of this stock in the event that one day they do find the elusive mother load but we are not holding our breath. The stock dilution is such that there are now 1.5 billion shares in the company, just a tad too many in our opinion.

High River Gold Mines: (HRG: TSX) We bought this at $2.49 and we increased our position in the company on December 7th, 2007 and we are still holding on to it despite the wrangle of attempted take overs by others. HRG closed at $0.81 yesterday, so we are still making progress, albeit slowly.

Fronteer Developments Group (FRG) Fronteer was originally bought as both a uranium and gold play as FRG owned the lion’s share of Aurora Energy Resources making it a gold/uranium play. On the 24th September 2007 we sold 50% of this stock for an average price of $10.44, banking a profit of 122%. Fronteer is currently trading at US$5.97 so we are now in positive territory with this portion of the purchase as our our original purchase was made on the 15 July 2006 at around the $4.70 level, so we are sitting on a small gain at the moment. Still expect this group to do a lot better and it is getting there slowly.

Fronteer Development Group Inc., acquired all of the remaining common shares of Aurora Energy Resources Inc. So this investment is well and truly a two pronged attack via both gold and uranium.

To stay updated on our market commentary, which gold stocks we are buying and why, please subscribe to The Gold Prices Newsletter, completely FREE of charge. Simply click here and enter your email address.

For those readers who are also interested in the silver bull market that is currently unfolding, you may want to subscribe to our Free Silver Prices Newsletter.

For those readers who are also interested in the nuclear power sector you may want to subscribe to our Free Uranium Stocks Newsletter, just click here.