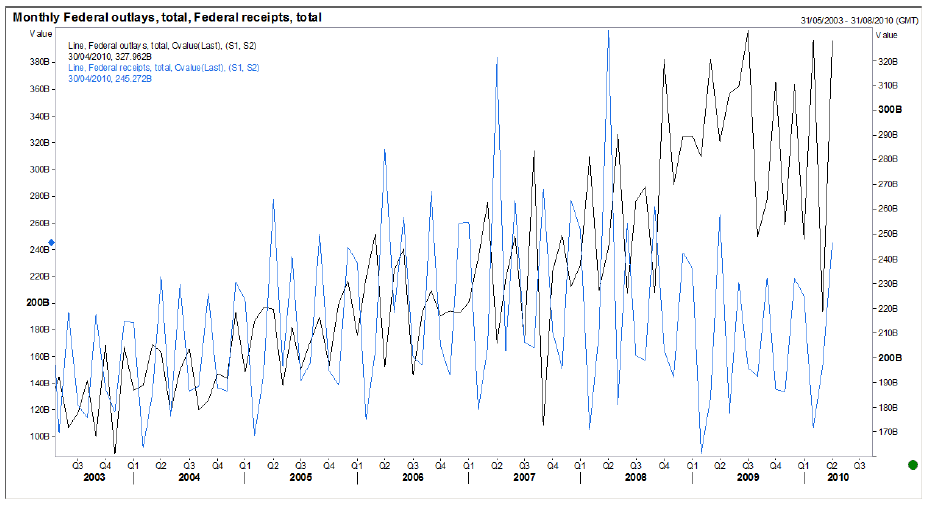 Quotable
“So far, markets have given the U.S. a longer leash. The danger is that we’ll hang ourselves on it.” —Mark Whitehouse, The Wall Street Journal

Ok, we all know the story (even though it’s been thrown on the backburner with the ongoing implosion of Europe): the US dollar is doomed because of the growing deficits and debt in the United States.

Even though the euro is making the front page of every newspaper and online editorial website, the story that’s been following the dollar around like a dark cloud has certainly not disappeared; it’s just waiting to strike again when its time.

When is it time?

The mainstream financial newsletter industry will probably be first to jump back on that bandwagon (assuming they ever really got off of it.) And when things around the world simmer down a bit, the regular financial news publications will probably become littered with the US dollar bear market story yet again. The 90% figure also represents what’s believed to be a critical threshold for debt-to-GDP; it may have a significant impact on growth once it surges above 90%. And as The Wall Street Journal puts it:

This time around, the roots of our indebtedness are very different. We’re borrowing to bail out consumers who took on too much credit and couldn’t pay, and to support social-security and Medicare systems we can’t really afford. We’re able to do this because financial markets have maintained a surprising faith that we will eventually get our spending under control, and because the dollar’s role as a global reserve currency has kept our borrowing rates unusually low.

You can argue that bail outs have gone to other unworthy candidates in addition to irresponsible consumers. And you can argue that there is a whole lot of other unnecessary spending on the books besides social security and Medicare, though those are two of the biggies.

1) As to the “surprising faith,” perhaps that’s what I’m taking into this whole argument.

It appears Americans are waking up to the pace at which President Barack Obama’s administration brought on increasingly large amounts of debt, to the dangers posed by the recent US and global recession, and the turmoil that’s shaken up Europe and exposed the problems with out-of-control budgets there as well.

Either way, Americans are realizing the US may be at a tipping point. This growing awareness is in fact a good thing. Despite current warts, and attack by recent government policies, the US economy is still the most dynamic economic system in history and has proven its resiliency time and time again. It can be turned around. Maybe the mid-term US elections will be a good start.

2) As to the “borrowing rates unusually low,” Bob Prechter, of Elliott Wave fame, recently gave an interview to The Daily Crux, where he argued for deflation to hit the US before inflation. Here’s something he said that’s no secret anymore:

Over the past eight years, the Fed’s lending rates have twice fallen to zero, meaning that credit is free. The Fed has created $1.5 trillion of new money. Central banks around the world have offered unlimited, cost-free credit. The government is spending money like mad. And the Fed and the Treasury have bailed out or guaranteed another trillion or two of bad debt and promise to do even more. Oh, and the Chairman of the Fed swore eight years ago that he would drop money from helicopters.

My point in bringing this up: consumer and businesses are at a point where they’re still deleveraging and/or shoring up their finances. They recognize that a change needs to be made; they recognize that there is a limit to spending and mal-investment at some point. They’re no longer diving into the temptation of unusually low interest rates, etc. This I think represents a secular change in sentiment toward debt.

Taxpayers are beginning to recognize this in their own way. It is only these taxpayers who can make government recognize this sentiment shift and act accordingly. And they’re working about as hard as possible to make that happen now.