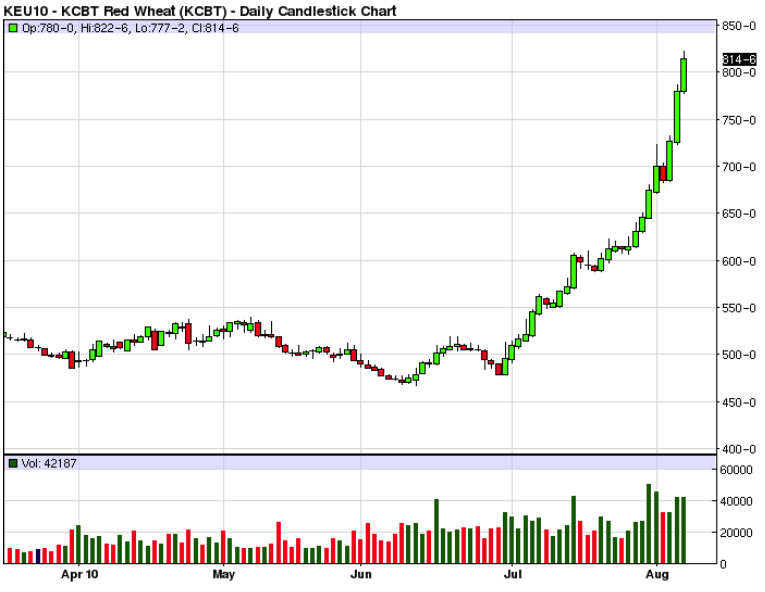 NEARBY KC HARD RED WINTER WHEAT: It Really Has Been Amazing, Hasn’t It?:

The rush higher began right at the seasonal turning point…June 15th… when the harvest for hard and soft red winter wheat has historically ended, but this is nothing short of stunning…..  and it has caught even the best professionals and grain trading exports off guard.’

“The only market that counts these days is the grain market for grains have leapt to the centre stage everywhere as news of the Russian-Ukrainian- Kazakhstani agriculture problems spreads like proverbial wild fire. Having traded to the limit up yesterday for a short while, and having accumulated pools for a short while, wheat quietly closed at the limit. It is trading materially higher this morning as those who’ve contracted wheat out of Russia for sales abroad now find themselves in a most uncomfortable position. They’ve sold grain they now do not have.
They had it once; they’ve become short of instead.” – Dennis Gartman

Russia yesterday (Thursday) banned grain exports after unrelenting heat left the country with its worst drought in at least a half-century.

Wheat rose to a 23-month high after Russia, the world’s third-largest grower, announced a ban beginning Aug.15 that will last through the end of the year. Corn and rice prices also surged yesterday after Russian Prime Minister Vladimir Putin said a ban on those grains would be “appropriate” in light of skyrocketing prices.

Domestic grain prices gained 19% last week, faster than at the peak of the global food crisis in 2008.  The ban includes wheat, barley, rye, corn and flour exports, according to the government decree that also set aside nearly $1.2 billion for stricken farmers…..read more HERE

Imagine yourself standing in fields of soy and sugar cane that carpet the land out to the horizon as far as you can see and sweeping blue skies overhead. Only an occasional tree or silo gives you any sense of distance.

You are standing on a vast savannah that is one of the most productive farming regions in Brazil. Called the cerrado, it produces 54% of Brazil’s soybeans, 28% of its corn and 59% of its coffee. It also supports 55% of Brazil’s beef industry.

It’s an immense area – about 200 million hectares (or 494 million acres) – with about half of the land still available to convert to producing farmland or to support livestock. This has been, and remains, a kind of frontier of world agriculture. When you look at the amount of new arable land cultivated in the past 30 years, much of it has come from right here.

Though Brazil didn’t win its sixth World Cup, the country is in a good spot. It has a few things the world will really need over the next couple of decades as the global population rises by more than 70 million people a year. It has land, water and plenty of sunshine. Good for growing things.

I’ve been thinking about Brazil more and more as I study what’s going on in the world’s agricultural markets. More and more, I come to the conclusion that Brazil will have a big hand to play. For investors, there will be a variety of opportunities. Some of these won’t be obvious from afar.

For instance, not all land in the cerrado is equally attractive. There is a big factor to consider: How easily can you get what you grow to market? For most of Brazil, the answer is “not easily.”

In Mato Grosso, the land is flat and there is plenty of rainfall. A farmer can enjoy three harvests a year, usually rotating between soy, corn and cotton. The land is also cheap there, which is what attracts me. But there is a big problem: The roads to the river port are in poor condition. The Economist recently reported that farmers here spend 38% of their revenues just to get their produce from the farm to the docks. Even then, some ports are just inadequate to the task and ships queue up as far as the eye can see, waiting to load.

(This is what made me think of Peter Fleming’s comment, “A man in a hurry will be miserable in Brazil,” which I quoted in yesterday’s issue. Brazil is not a place where things happen quickly. By some estimates, Brazil needs to double its investment in infrastructure to keep up with growth. That will be an opportunity in itself.)

So infrastructure here is better than in some of the other inland areas, and it is improving. The land here, though, is still cheap. In part, that’s because the soil is very old and is low in nutrients needed to become productive farmland. But that creates a wonderful opportunity.

An investor today can buy the raw land for around $2,500-3,000 per hectare. Then, over a three-four year period, you could remediate the land by adding lime and fertilizers and planting restorative crops such as soy. This is a straightforward and proven process and largely self-funding.

At the end of the period, you’ve got good productive land worth at least double what you paid for it. The market values farmland based on how much it produces. How many sacks of soy, for example, does it produce per hectare? The better they yield, the higher the price.

That’s the idea behind a new fund forming to take advantage of the situation. It is targeting 45 sacks per hectare, which would fetch $6,300 per hectare. After management fees, the investor would earn an estimated 27% annual return, on his way to doubling his money.

Of course, an investor could do a lot better if soy prices were higher. Also, the impact of the new infrastructure will likely raise the price of land, too. It’s a good situation.

I plan to visit Brazil in September to get a firsthand look at the cerrado and Campo Grande. You are invited to come along. We’ll meet with Rob Hill, the director of the fund I mentioned above, and you’ll have the opportunity to invest if you choose. (The minimum investment is now $100,000.) He’s a good guy and knows the agricultural story in Brazil better than anyone I’ve ever met. I’m sure we’ll get all kinds of good intelligence from Rob.

Also, we’ll meet with Helio Netto, from Sotheby’s International Realty, who specializes in Brazilian farms and agribusiness. Alan Marks, a professor of economics at the University of Campo Grande, will give us context. These are just a few of the folks we’ll meet.

We’ll also spend some time in São Paulo. And if you’d like, when the business part of the trip is over, we’ll head out to Rio de Janeiro to relax and enjoy a bit of Brazil. It should be a good and very educational trip.

In the meantime, I continue to seek out good investments in agriculture (both in and out of the stock market), which I think will be a good business to be in for many years to come. I also have been keeping a watch list of Brazilian stocks and stocks that should benefit from the transformation happening in Brazil. I’ll share some of the more interesting ones with you in a future letter. Stay tuned…