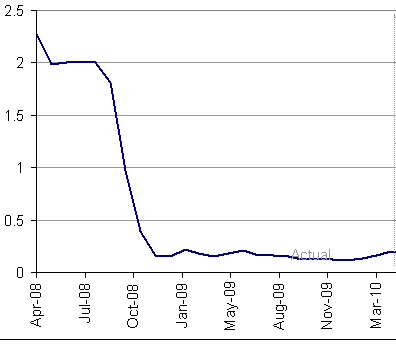 (June 22, 2010) The FOMC meets (yesterday) to discuss their record-low interest rate policy. The announcement of their decision will be released on Wednesday. While no increase in interest rates is expected, there is little doubt amongst investors that the future direction for the central bank’s target rate will be up. In fact, Kansas City Fed President Thomas Hoenig has repeatedly expressed his desire for an increase in overnight lending rates to 1 percent from the current zero-0.25 percent range by the end of summer.

However, recent economic data including; the Philly Fed Index, first time jobless claims, Non-farm payrolls and retail sales are already pointing to a probable double-dip recession. Therefore, the Fed’s next move is more likely an ease rather than a tightening of rates.

But the ease won’t come in any of the traditional forms. The Fed isn’t going to reduce rates to a negative level. Charging people to deposit their money into a bank just isn’t going to be politically palatable. Our central bank will also not seek to once again dramatically increase the size of the Fed’s balance sheet. Although the Fed bought another $7.34 billion in Mortgage Backed Securities last week, even Mr. Bernanke won’t be foolish enough to buy up another $1.5 trillion of assets that he will not be able to dispose of in the future.

The next ease from the Fed will most likely be in the form of ceasing to pay interest on excess reserves. Since October 2008, the Fed has been paying interest on commercial bank deposits held at the central bank. But because of Bernanke’s fears of deflation, he will do whatever it takes to get the money supply to increase. With rates being near zero and the Fed’s balance sheet already at an intractable level, the only viable solution to fight Ben’s phantom deflation fear is for him to remove the impetus on the part of banks to keep their excess reserves laying fallow at the Fed. If commercial banks stop being paid to keep their money dormant, they will find a way to get money out the door. They may even start shoving loans out through the drive-up window. Banks need to make money on their deposits (liabilities). If the don’t get paid by the Fed, they will be forced to take a chance on the consumer. After all, it has been made clear to them that the Fed and Treasury stand ready to bail out banks’ bad assets at any cost. So why not take the chance once again?

The statement from this month’s meeting of the FOMC will probably not indicate that interest will no longer be paid on deposits by the Fed to commercial banks. However, in the near future this strategy will be the most appealing method for the Fed to increase liquidity. Once Mr. Bernanke assents to the double-dip recession scenario, he will fight deflation by any means necessary.

Deflation is not a possible outcome if a central bank is willing to do whatever it takes to increase the money supply. The fed can buy every house on the market if it so desired and it could buy every dollar of our $13 trillion national debt. And while it is true Bernanke can’t force banks to lend, he can compel them to boost the money supply by removing any compensation involved from keeping the money multiplier in check. And even if there was no banking system or fractional reserve system in place, it would be a specious argument to make that inflation could not occur without having private banks involved.

According to Bernanke’s academic philosophy, expanding the money supply somehow equates to growing the economy. In order to grow the economy credit must be available, but much more importantly interest rates and the value of the dollar must be stable.

The current Federal Reserve Chairman is a student of the Great Depression. Although he will, unfortunately, most likely get a chance to study one first hand, this next one will be marked by inflation rather than deflation. Investors should be aware he will do whatever it takes to avoid a collapse of the money supply and a double dip in the economy. Part of his plan is to ensure there is not only plenty of money printedùthat much he has already accomplished in spades–but that banks are also well incentivized to loan it out.