Posted by Chris Mayer via Bullionvault.com 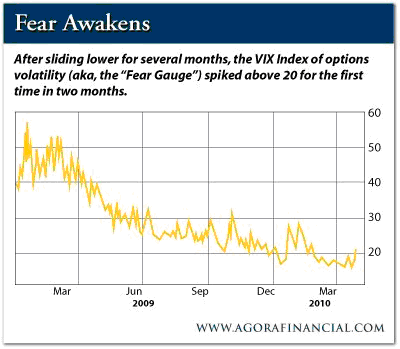 The financial crisis hasn’t been fixed. And then, there’s government debt…

FEAR GIVES FOOLS intelligence, says an old proverb. Turning it around a bit, we might say that lack of fear makes fools of wise men, writes Chris Mayer in The Daily Reckoning.

In the market, fear – or the lack of it – finds expression in many forms. The Volatility Index, or VIX, is one of them. Known as the “fear gauge”, the VIX bounces up and down based on what people are paying for options on the S&P 500.

For example, if people are fearful, they tend to buy put options. Put options are like insurance against a fall in price. They pay off if the market falls. When investors pile into put options, they make the price of such options rise, and that pushes the VIX up, too.

Conversely, when people are not worried, they sell those options – or at least they don’t buy them. So the price falls, and so does the VIX. There has been a lot of that going on in the last year. The VIX recently hit its lowest point in 30 months, as shown by the nearby chart.Fear looks cheap. Given all that is going on in the world, it is remarkable to find investors so complacent. The financial system is still a rather creaky affair. Leverage is still high. Banks remain undercapitalized. The credit cycle has not yet run its full course, as there are still significant credit losses hiding in the cupboards of banks.

Then there are the governments of the world. The US has awful credit metrics. It is bleeding money and owes huge debts. Most of the 50 states are also bleeding money and have large debts, including giant gaps in unfunded pension liabilities. They are perhaps worse off, because unlike the US government, the states cannot print their own money. Then there is the EU. And Japan.

There are only a few ways to cure such ills, and none are painless. One thing is for sure: These ills can’t go on forever.

So in the context of all this, fear looks cheap.

Conveniently, Wall Street has made fear a tradable commodity. One way to play it is through the iPath S&P 500 VIX Short-Term Futures fund. Though a mouthful, it simply aims to mimic the VIX. It trades under the ticker VXX, and started trading only this year. It’s done horribly, as you would expect given the fall in the VIX.

Yet it could be a nice play should we have another spike in the VIX. If fear should rear its head again, as it undoubtedly will, the VXX ought to prove nice insurance. More than just insurance, it could return three or four times your money, depending on the spike.

Whether buying the Vix or some other insurance, however, fear is cheap. Buy some before the price goes up.

Want Physical Gold in your name – and your name alone? Choose secure storage from New York, London or Zurich for just $4 per month, only at BullionVault…

A keen student of financial history, Christopher W. Mayer gained an MBA in finance before beginning his banking career in corporate lending.

Chris’s unique brand of “value” investing has earned him a strong reputation as an analyst and writer. You can learn more here…