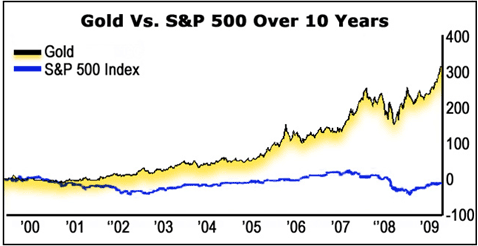 Sell your gold only IF you want to lose money!

Something about gold just makes people irrational. The latest meme making the rounds in the mainstream media is that gold is a bad investment over the longer term. A couple of radio hosts asked me about it, and even Bloomberg ran a story on this earlier this week, saying that gold can’t beat the returns on a checking account over the last 30 years. The rest of the story was about while hedge fund managers are buying gold, it’s a poor investment for regular folks.

There’s so much wrong wrapped around the one nugget of truth in the Bloomberg story that it’s hard to know where to begin. But I’ll try.

And before I do, let me just say that if you really think gold is a poor investment, go sell your gold, please. I want gold to get cheaper. Why? Because my subscribers are waiting to BUY gold again, and we’d love to buy your gold on the cheap. Despite the recent correction — a normal and necessary part of any bull market — the long-term trend in gold is way, way up.

Now, as for the canard that gold is a bad investment, let’s see …

It is true that gold has underperformed measured on a 30-year time frame. But how many people buy-and-hold for 30 years? Certainly I’ve never seen that investment strategy pushed by any of the gold-hatin’ jackalopes on their hind legs now.

A more reasonable investment time frame is 1 year, 5 years, or maybe on the outside, 10 years. Let’s see how gold does against the S&P 500 over those time frames …

That’s right — over the last 10 years, the S&P 500 has a negative return. Well then, the mainstream media should be warning people away from the major stock indices, right? Ri-i-i-i-i-ght.

Meanwhile, gold’s 10-year return is just enormous. You can get a better feel for it in this next chart … You can see that not only is gold outperforming the S&P 500, the outperformance is accelerating. To be sure, there’s no guarantee that this outperformance will continue, or that gold will even continue to go higher. However …

Throughout history, there have been bull markets in raw materials every 30 to 40 years. Occasionally, a bull market will turn into a commodity supercycle, like the one the U.S. experienced around the turn of the 20th Century, or again after World War II. Supercycles can go for a LONG time. Many people think that China’s hunger for raw materials has triggered another supercycle.

Recent commodity bull markets averaged about 17 to 18 years in length — though they’ve gone as long as 22 years — and experienced very large rallies.

What’s more, a recent study by Yale University’s School of Management and the Wharton School at the University of Pennsylvania demonstrated that commodities have outperformed stocks and bonds over a recent 45-year period with less risk, and were a better hedge against inflation. Now there they go, cherry-picking a time frame like 45 years. How Bloomberg-ian of Yale!

One central bank after another has been buying gold recently, and central banks will become net buyers of gold this year for the first time since 1988, according to New York-based researcher CPM Group. In October, we saw India, Mauritius and Sri Lanka buy more than half of the 403.3 metric tonnes of gold that the International Monetary Fund was bringing to market. And Russia’s central bank also increased its gold holdings by 2.6% in October.

That buying trend in Russia continued in November. Russia’s gold reserve probably rose by $790 million to $23.1 billion in the week ended Nov. 27, according to a report in the Moscow Times. The Central Bank increased gold holdings by almost 130 million tonnes in the last year, according to the report.

Gold Coins Are Selling Out

Talk about a hot market. Last Thursday, the U.S. Mint put the three fractional gold American eagles on sale, then had to suspend sales the next day as virtually everything sold out!

The U.S. Mint recently suspended the sale of American Eagle gold coins after they sold out.

The fractional gold eagles are one-half, one-quarter and one-tenth of an ounce in size. This follows the previous week’s news of sales of the one-ounce gold and silver eagles being suspended and the gold buffalos were also suspended. Speaking of gold buffalos — sales for the 2009 Gold Buffalo bullion coin exceeded sales for 2007 and 2008, despite the fact that the 2009 dated coins were only available since October 15, whereas the prior two year’s coins were available throughout the year.

The good news for coin buyers is that American silver eagles have since gone back on sale. I wonder how long that will last?

Summing up, it’s easy to draw two conclusions from this news …

Yep, China’s total demand for jewelry and investment is forecast at 432 tonnes, according to market analysts at GFMS. GFMS forecasts total gold demand from China in 2009 to be 432 tonnes, compared with that of 422 tonnes from India. China’s investment demand alone was forecast at 83 tonnes, easily passing India’s 53 tonnes.

And then there’s the small matter of China advertising the “opportunities” in gold and silver and urging its citizens to buy the precious metals.

Nonetheless, when Hu Xiaolian, the vice-governor of China’s central bank, recently made a statement that Beijing would not buy gold indiscriminately — and called the gold market a “bubble” — the gold haters in the mainstream media seized on this as proof that China would not be adding to its gold reserves, at least not anywhere near present prices.

Those gullible media talkers must have too much lead in their toothpaste. Since when can we believe the Chinese on ANYTHING? They’re nice folks, but always get proof to back up what they say, because the Chinese are the biggest market manipulators in the global economy. If you don’t think so, just ask anyone who trades the copper, zinc or other metals markets. The Chinese often try to talk down the metals markets, to their own advantage as they come in and scoop up bargains.

I think the Chinese want to buy gold, and like everybody else, they would prefer to do it at cheaper prices.

All This, and Tight Supply, Too

Previously, I’ve told you about other forces at work in the gold markets — exchange-traded funds that hold the physical metal could become sellers eventually, but they’re buyers now. Mine supply is tight and probably going to get tighter as ore grades drop at new projects and mining costs rise.

And those ads on TV to “sell your gold” (at terrible prices, probably) may have brought in some used bling-bling, but that can only go on for so long. The dumb money is selling gold to the TV-advertising sharpies. Meanwhile, hedge funds, big investors and central banks — the smart money — are buying gold, or at least poised to buy when gold hits their targets.

Dumb money is selling, smart money is buying. Which are you?

I haven’t said much about silver yet. Silver should fall faster than gold, but its next move to the upside could be explosive. The silver market is worth only about $9 billion — 20 times smaller than the gold market — and so that offers potential for bigger percentage moves UP and DOWN.

A Pullback That Can Be Bought

So, yes, gold is pulling back as the U.S. dollar rallies. The dollar rally could continue for a bit, and that will give you the best prices on gold we’ve seen in quite a while, as the metal retraces part of its big rally.

In my video on Tuesday, I laid out some price targets for such a pullback. I’ve given my premium service subscribers even more detail, with other price supports below those indicated in the video. But if you’re doing this on your own, here’s my two cents (which is equivalent to a dollar in 1913, before inflation ate away its value) …

Wait until gold pulls back to a level you feel comfortable with.

When gold hits your level, consider entering positions in stages.

If you want leverage, buy select gold stocks and funds.
In late June, I announced my target on gold for 2010 at $1,300 an ounce. That hasn’t changed … not yet anyway. It’s not written in stone. I’m always open to new information. I also think gold will double over the next four or five years.

You’re in charge of your own investment destiny. If you like ETFs, consider the ETFS Physical Swiss Gold Shares (SGOL), backed by one-tenth of an ounce of Swiss-stored physical bullion per share. Volume is a little light, but you can’t beat the Swiss guarantee. For convenience, nothing beats the SPDR Gold Shares (GLD).

And if you’re an international traveler — or feeling paranoid — consider the ZKB Gold ETF on the Zurich Stock Exchange. I’m told you can take your ZKB shares to the Zurich Cantonal Bank, owned by the Canton of Zurich, take possession of the actual bullion, and you can even store that gold in Zurich.