Everything set for The Upside Explosion of Silver 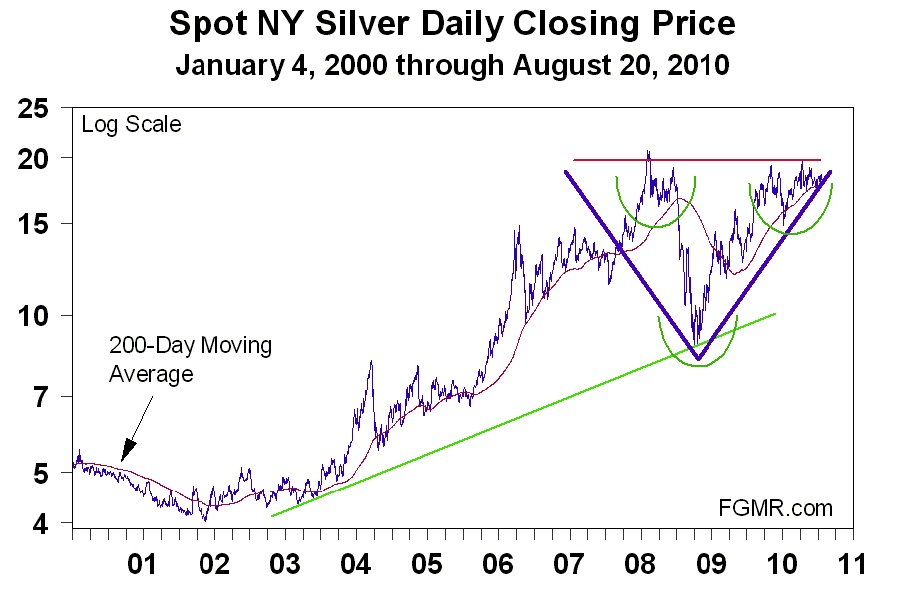 If someone were manipulating the silver market, you would see exactly what has actually occurred in silver over the past several days.

To manipulate the price you would use your buying power and accumulate long positions until you force silver above resistance in the high $18.40s and thereby trigger all the buy-stops sitting there, including the one we placed.  You would then sell your long positions into those buy-stops and keep selling until (1) you became short and (2) your selling drove prices lower.

I have just described exactly what has just taken place in silver.  What we have seen is a classic textbook case of market manipulation.  We have seen it so many times before in recent years, it is the reason I warned on 18 August: “Let’s see if silver can hold this level, particularly with option expiry coming soon.”

I expect that we will see the rest of this repetitive pattern of manipulation play out over the next few days until this month’s options expire.  I also expect that silver will remain under $18 during this period.

There may in fact be another bout of selling pressure by the shorts to shake out some more weak-hands.   It would give the manipulators an even bigger profit when they buy back on even lower prices the short positions they established on the breakout above $18.40.  Consequently, I will not be surprised if the 2-year uptrend line in the following chart is broken this week. I don’t think that uptrend line will be broken, but don’t panic if it is.  And don’t be distracted from the big picture – both technical and fundamental.  Technically, silver has nearly completed a huge accumulation pattern, and the ‘head-and-shoulders’ pattern in the above chart is far more important than the 2-year uptrend line.  Silver is approaching an important upside breakout.  It is the breakout that I have been anticipating for months.

The fundamental picture for silver is just as bullish.  Monetary debasement throughout the globe is causing astute people everywhere to carefully look for prudent alternatives.  It is inevitable that they eventually discover what countless people have already discovered over the past decade – that gold and silver are safe-havens from monetary debasement.

Thus, everything remains in place for an upside explosion in silver.  With each passing day, week and month we are getting closer.  Be ready for that breakout by not losing sight of the big picture.

The objective of this website is to be informative and educational.  It aims to help readers better understand gold, money and currency through James Turk’s commentaries and insights.

James Turk is founder and chairman of GoldMoney, which provides a convenient and economical way to buy and sell gold, silver and platinum online using the digital gold currency for which he was awarded four US patents.  He has specialized in international banking, finance and investments since graduating in 1969 from George Washington University with a B.A. degree in International Economics.  He began his business career with The Chase Manhattan Bank (now J.P. Morgan Chase), which included assignments in Thailand, the Philippines and Hong Kong.  In 1980 he joined the private investment and trading company of a prominent precious metals trader.  He moved to the United Arab Emirates in December 1983 to be appointed Manager of the Commodity Department of the Abu Dhabi Investment Authority, a position he held until resigning in 1987 to begin FGMR.