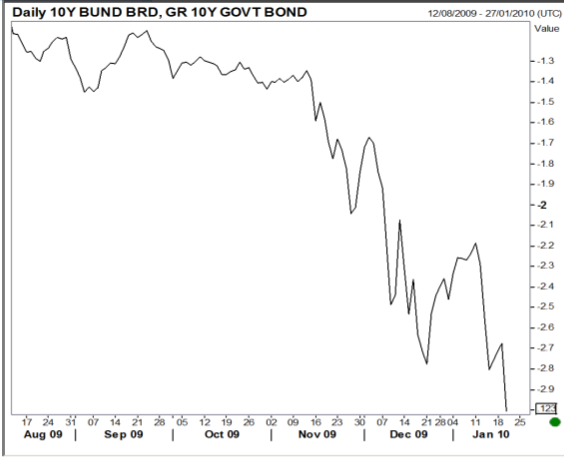 Let’s look at what the euro has done against the US dollar compared to what the Chinese currency has done since the last dollar bear market began. Below is a percent change chart with the starting date June 1, 2002. As you can see, the euro (purple) has gained 54% since that time; while the juggernaut of global growth from China-the yuan-has moved about 0% since that time. Thus, the euro has appreciated about 54% against the Chinese currency too.

Quotable
“The UK recovery is likely to be sub-par, but it would be unwise to write off the prospects for a stronger recovery.  However, assuming a sub-par recovery, monetary policy tightening is unlikely before the end of 2010.  What happens to monetary policy will also be substantially affected by what happens to the fiscal outlook (with the election a major complicating factor).  On fiscal policy, we continue to think that more needs to be done than on the existing government’s plans.  Debt issuance will remain enormous in 2010-11, and without Bank of England buying there will be a shift in the balance of supply and demand.  However, we think that demand worries are overdone and that worries about UK solvency remain significantly overdone.  However, the (albeit weak) economic recovery will ultimately ensure higherbond yields.  The prospect of higher bond yields is the main reason why we remain cautious on UK equities.” –  Morgan Stanley Economic Forum

Note: Below is a Greek vs. German Bund 10-yr bond spread chart we showed you in Monday’s Curency Currents; we were expecting the euro to follow…it has and is being punished this morning.