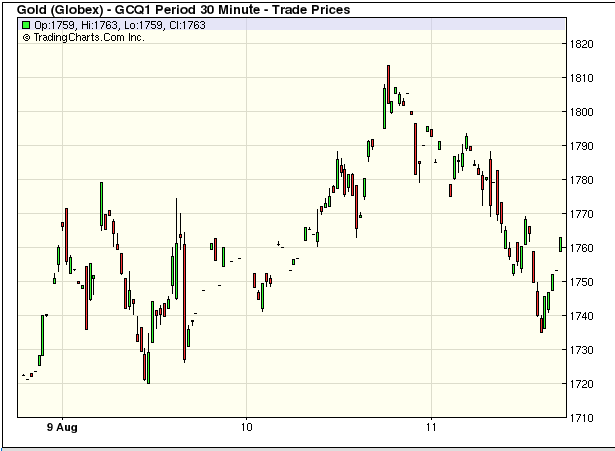 As soon as gold hit $1,800 Michael Campbell sought and obtained and interview with the Gold Mining Industries go to analyst, a man who had written on July 15th that he had “I have never been this bullish on gold”.  Clearly Martin was dead right. When he made that comment gold was $1,500.

What does he think now? Martin thinks that all of the factors that have pushed gold from $252 to $1,800 remain in place. Specifically the existing crisis which “has been building for 40 years” is the crisis of confidence in past, present and future Government policy. “Some very very difficult decisions have to be made, both in Europe and the United States.”  While he thinks Europe is in a worse position than the United States, both are in very deep trouble because they continue to promise to pay for entitlements that they simply don’t have the money for. “The percentage of Government expenditures that went to defense was higher than the percentage going to entitlements back in the 70’s, of course that has totally reversed.”

A decision to cut entitlements, raise taxes or both has to be made and there is no sign that any of these dramatic changes are on the horizon.

Central Banks to the rescue – “Now clearly gold has run because of the expectation of a significant amount of Federal Reserve and ECB monetary support for the system.” The crisis get worse as they continue to postpone the problem. And they are slow. As an example, Martin mentions the European Financial Stability Fund which is supposed to get 440 billion hasn’t actually been implemented and is not likely to until September. “They are moving far to slow with far to little money. To borrow a phrase from John Paulson during the 2008/2009 crisis what we need now is a humongous bazooka.”

More quantitive easing from Central Banks? Another way of saying they are devaluing their currency. Indeed Martin thinks that Governments “have to devalue the currencies” “that we really need now is some more inflation.

The last time they did quantitative easing commodities ran hard. Dr. Martin Murenbeeld PhD is the Chief Economist of Dundee Wealth Management. Martin analyses and advises on economic and financial developments, with special emphasis on North American interest rate and currency market trends – and on trends in the gold market.