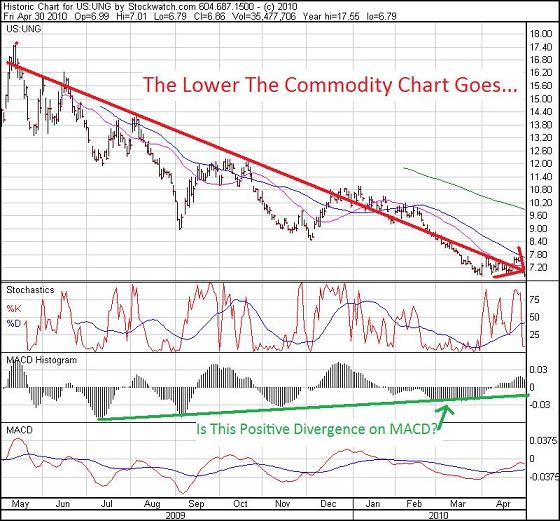 Investors who are looking to the XNG:NYSE Natural Gas Index to tell them the future of  natural gas prices could be making a costly mistake.

XNG:NYSE – which tracks large cap companies in the US natural gas industry – has been heading up for 12 months – in the directly opposite direction as UNG:NYSE, the high profile ETF that tracks the price of natural gas.  It has been going down for 12 months, and set a new 52 week low late last week.

How can two related natural gas charts go in opposite directions for so long?  Which one should investors look to try and make money?

UNG is supposed to track the natural gas commodity price in the US, based on the near month contract on the Henry Hub in Louisiana.

(There are several natural gas “hubs” where natural gas prices are quoted around the US, but the Henry Hub is what most media quote – and while there used to be a big difference between the regional hubs, increased pipeline capacity around the US has lowered those differences a lot.)

XNG measures the stock performance of a basket of large cap companies in the natural gas industry – but they are not all producers.  Some are pipeline, transportation and transmission companies.

Look at the two charts, which at first blush I would expect to mirror each other – the underlying commodity and the equities that should track that commodity: So what gives with that?  Does one of these charts have to “give”, somehow?

The short answer is “not really”, and it has to do with how the index is made up, and how some of the companies in the index do business (I’ve listed them alphabetically at the bottom of this article).

The stock price of Kinder Morgan was going up anyway, but as soon as their Rockies Express pipeline from Colorado to Ohio went live last fall, their stock took off even more.  They’re up more than 50% in the last 12 months.  Williams is almost a double.

Second, several of the producers in the index have been very high profile about transforming themselves into oil-weighted companies as fast as they can find deals and if need be, raise the money.  Apache Corp. (APA-NYSE) spent $5 billion in just one week in April 2010 buying two sets of oil assets in the Gulf of Mexico (Too bad for them it was before the BP spill).  Chesapeake (CHK-NYSE) has been very vocal since February that it wants to become a lot more oil weighted.

On February 25 2010, EOG Resources CEO Mark Papa said it “can no longer be considered primarily a natural gas company.” – and the stock jumped more than 25% in two months!

And of course XTO:NYSE is being bought out by Exxon (XOM:NYSE) for stock, so their stock will track Exxon – the largest independent oil company in the world – until that deal closes.  XTO stock has nothing to do with the price of natural gas now.

And lastly, several of the companies are integrated producers, meaning they not only produce the gas out of the ground, (called the upstream business) but also have pipelines and other infrastructure that deliver the gas to customers (called the downstream business).   As I mentioned with the pipeline companies – they’re doing a lot better.

So, for those reasons, the XNG stock index and the UNG commodity index – even though they’re both tracking different parts of the natural gas industry – don’t necessarily have to have a tight, direct relationship.

Investors could be tempted to look at XNG, and because stocks lead commodity prices – the market usually predicting where prices will be 9 weeks to 9 months out – as a barometer of where natural gas prices could be in the future.  But the XNG has pipeline companies, and several producers who are moving away from natural gas as fast as they can.  It’s not just natural gas producers.

So that investment hypothesis could be a costly mistake.

The XNG index is currently made up of:

I read MANY research reports, and I do a lot of original research – call management teams, talking to my contacts in the oil patch, scour company financials – to find the companies with the best chance to provide investor profits.

But these reports also give me many great story ideas for the blog, that haven’t hit the mainstream media yet.  That’s why you should sign up at the blog to get notified of new stories.

I write the blog and the subscription service so everyone can understand the story. I keep it simple.

Subscribers get a minimum 10 issues a year, and there is often more than one stock presented.

The Oil and Gas Investments Bulletin is a completely independent service, written to build subscriber loyalty. No company ever pays in any way to be profiled.

I am so confident you will find value in my service I offer a 60 day, money back guarantee, no questions asked, for annual subscription purchases.  Please read the sample report I have posted on the website to get an idea of how I profile these fast growing stocks.

Email me with any questions at editor@oilandgas-investments.com