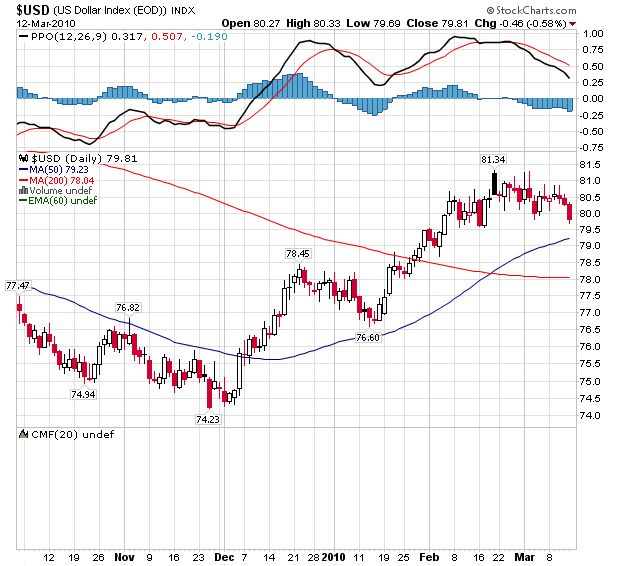 By late 2009, as the U.S. dollar flirted with multi-year lows against most foreign currencies, big investment players crowded into trades that shorted the greenback. Commentators noted that the anti-dollar momentum had taken on a life of its own and that the trade had become too crowded. It is true that markets have a nasty tendency to move against the crowd. When a lot of traders agree on a particular trade, it’s more likely that in the short-run the opposite trade will be a winner. The 2008 “flight to safety” rally of the U.S. dollar was a once in a lifetime event that presented huge opportunities for aggressive currency traders. By December 2008, after rallying 25% over the previous five months, the dollar topped out. However, there were many speculators who had come somewhat late to the party, as well as many others who had ridden the dollar up and were thus sitting on huge unrealized gains.

Those technical reasons, combined with the re-emergence of strong growth in emerging markets and solid earnings from overseas companies, redirected investment flows away from the dollar. 2009 became a year of dollar weakness, with the buck giving back nearly all of its gains. At that point, most people made the reasonable conclusion that the decline would continue.

As is often the case, an unforeseen event came along that made mincemeat out of the consensus’ well-conceived strategy. Once some fiscal squabbling grabbed headlines in the eurozone, the negative sentiment that had built up on the dollar was suddenly diverted to the euro. Catalyzed by the Greek debt crisis, the greenback surged by about 8% in six weeks.

From a technical standpoint, the short dollar trade of late 2009 was too crowded; but from a fundamental standpoint, I don’t think it was crowded enough. As with stocks, there can be no long-term substitute to examining a government’s fundamentals to determine its currency’s worth. Based on the fundamentals, far too many investors remain far too confident about the greenback’s underlying viability.

In fact, I do not think I have ever seen so rapid a change in sentiment in my career. The crowd had completely switched sides, with most now betting on the demise of the euro rather than the dollar. This is looking like July 2008 all over again, with the dollar poised to put in over-sized gains. It also presents a good opportunity for those who keep their heads.

In my opinion, the market is now perfectly positioned for a massive dollar sell-off. The fundamentals for the dollar in 2010 are so much worse than they were in 2008 that it is hard to imagine a reason for people to keep buying once a modicum of political and monetary stability can be restored in Europe. In fact, the euro has recently stabilized.

My gut is that the dollar sell-off will be sharp and swift. Once the dollar decisively breaks below last year’s lows, many of the traders who jumped ship in the recent rally will look to re-establish their positions. This will accelerate the dollar’s descent and refocus everyone’s attention back on the financial train-wreck unfolding in the United States.

Any doubts about the future of the U.S. dollar should be laid to rest by today’s announcement that San Francisco Federal Reserve President Janet Yellen has been nominated to be Vice Chair of the Fed’s Board of Governors, and thereby a voter on the interest rate-setting, seven-member Open Markets Committee. Ms. Yellen has earned a reputation for being one of the biggest inflation doves among the Fed’s top players.

Looking for an ally to paper over the administration’s gaping fiscal holes, it is not surprising that president Obama made this selection. Yellen has consistently downplayed the dangers of inflation and has made statements that indicate she views the Fed as an extension of the Labor Department, rather than a guardian of our currency. Last month, in discussing what she saw as the Fed’s obligation to promote employment, she said, “If it were possible to take interest rates into negative territory, I would be voting for that.” She may very well make Chairman Bernanke look like a tightwad by comparison.

It is anyone’s guess which sparks will be responsible for igniting the falling dollar powder keg. From a trader’s perspective, a sharp reversal in the dollar will catch many investors completely off guard. Those who stepped off the short-dollar train will be stuck on the platform as it speeds away. Those who refused to give up their seats are in for a hell of a ride.

Peter Schiff, the Euro Pacific firm’s president, and a renowned pioneer in the field of international investing for individual investors, leads a team of investment professionals and support staff dedicated to the highest levels of customer service, a team literally searching the world over for valuable investment opportunities.

Founded in 1980 and headquartered in Westport, Connecticut, Euro Pacific is a full service, FINRA-registered broker/dealer that has historically been recognized for its expertise in foreign markets and securities. Through its direct relationships with countless foreign trading desks, the firm’s clients are able to avoid the large spreads often imposed by domestic market makers of foreign securities, thereby substantially reducing overall transaction costs. See The Euro Pacific Advantage

Though we offer access to all U.S. stocks and bonds, and are certainly knowledgeable in domestic investments, we specialize in international securities. By trading foreign stocks and bonds through Euro Pacific Capital, individual investors can benefit from our extensive experience in this highly specialized area. Euro Pacific Capital’s clients gain access to foreign markets which are out of reach for most individual investors trading through traditional brokerage firms. With Euro Pacific’s guidance, buying foreign stocks and bonds, and building a truly global portfolio, has never been easier. Let us put our experience to work for you.

Euro Pacific Capital does not engage in any market making activities, thus the firm’s individual and corporate clients can be assured that any recommendations given are free from the various conflicts of interest so prevalent among Wall Street brokerage firms.