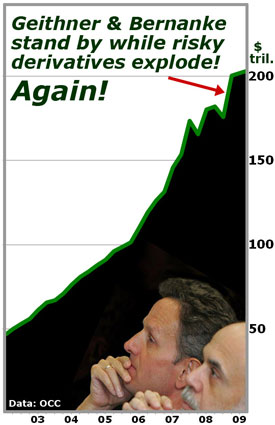 Martin here with an urgent reminder that, despite what you may be hearing from Washington, risk is still a four-letter word.

And despite solemn vows to the contrary, the U.S. government is promoting risk with new-found enthusiasm and gall.

But even while they give lip service to protecting you, they stand by passively as derivatives grow explosively. Derivatives are debts and bets of all shapes and sizes, especially on interest rates, bonds, mortgage-backed securities, and other fixed instruments.

They were at the epicenter of the financial earthquake that shook the world last year. They triggered the demise of Bear Stearns, Lehman Brothers, AIG, and many others. And they’re still causing a series of aftershocks around the world, as in Dubai late last week.

So you’d think the authorities would have taken steps to reduce their threat to the U.S. banking system.

Not quite! Despite a brief reduction in derivatives outstanding in last year’s third quarter, U.S. commercial banks now hold a grand total of $203.5 trillion in derivatives, a new all-time high.

What’s worse, there has been no change whatsoever in the stranger-than-fiction facts behind that number — namely that …

A whopping 97 percent of all U.S. bank-held derivatives are concentrated in the hands of just FIVE institutions — JPMorgan Chase, Goldman Sachs, Bank of America, Citibank and Wells Fargo.

JPMorgan alone holds $79.9 trillion in derivatives — more than the grand total held by Bank of America and Citibank combined. (For the evidence, click here.)

Over 96 percent of all U.S. bank-held derivatives are traded over the counter, outside of any regulated exchange — a wild zone where neither central authority nor national responsibility play a significant role. (The evidence.)

The derivatives held by insurance companies like AIG aren’t even included in this tally. Yet, in a confidential memorandum leaked to the press earlier this year, AIG executives confessed that

“Systemic risk [triggered largely by derivatives] afflict all life insurance and investment firms around the world … If AIG were to fail, it is likely to have a cascading impact on a number of U.S. life insurers already weakened by credit losses. State insurance guarantee funds would be quickly dissipated, leading to even greater runs on the insurance industry.”

(For your reference, AIG’s memo is up on our website with key sections highlighted. Click here to view.)

Globally, the monster is three times larger than the $203.5 trillion in derivatives held by U.S. banks: According to the Bank of International Settlements (BIS), the worldwide total of just the unregulated, over-the-counter derivatives alone was $604.6 trillion at mid-year 2009. Although down from 2008 peak levels, it was up sharply from year-end 2008. (The evidence.)

Global authorities claim they want to tame this monster. In practice, however, they’re doing everything they can to feed it and keep it growing.

It’s the same derivatives monster that former Fed Chairman Alan Greenspan & company fought to protect back in the 1990s.

And it’s the same derivatives monster that Bernanke and Geithner are struggling so strenuously to protect today.

How? We’ve detailed and quantified the weapons of mass expansion they’ve been deploying in recent months:

New tax rules issued by Mr. Geithner’s Treasury Department three months ago are now prompting banks around the country to sweep bad maturing loans under the rug simply by extending their terms — despite deteriorating collateral values and even despite questionable payment history.

These tactics — widely known in the industry as “extend and pretend” or “delay and pray” — are very similar to those used by savings and loans in the 1970s and early 1980s, also with the tacit encouragement of the regulators.

The big difference: Today, a far larger percentage of those bad debts are leveraged up with derivatives, another form of fuel for the growing monster.

Right now, the banks’ extend-and-pretend tactics are especially popular in the one loan sector that has the biggest troubles: commercial real estate.

No one knows which banks are the biggest offenders. But we do know which ones are the most exposed:

As a rule, a bank’s nonperforming commercial real estate loans should be no more than a fraction of a percent of total assets. In contrast …

None of these are pipsqueak institutions — all have total assets of at least half a billion. Plus, there are another 42 smaller U.S. banks with similar — or greater — exposure to bad commercial real estate loans. (For the complete list, click here.)

If the authorities had any semblance of respect for their own pronouncements, they’d crack down. Instead, they’re doing precisely the opposite — aiding and abetting a bad-loan cover-up with new accounting rules that make most of the cheating perfectly legal.

The U.S. Congress and the public are now painfully privy to the massive role that Fannie Mae and Freddie Mac played in enabling American homeowners to overborrow … enabling Wall Street to overleverage and fomenting the conditions that led to the housing bust and derivatives disaster of recent years.

So … is that why, in our infinite wisdom, we have encouraged the Federal Housing Administration (FHA) to do precisely the same thing, effectively picking up from where Fannie and Freddie left off? When will we ever learn?

Unfortunately, that may not happen until AFTER the FHA goes bankrupt.

According to the FHA’s own annual report, its Mutual Mortgage Insurance (MMI) capital ratio — its single most important measure of solvency — has plunged from 6.82 percent in 2006 to a meager 0.53 percent in 2009.

According to the National Housing Act, the FHA is required to keep this ratio at 2 percent or higher. So already, it is in violation of the Act. (For the evidence, click here.)

And despite promises to remedy the problem, the stated goals of the FHA — to replace much of the housing market lending support that was wiped away in the debt crisis — is merely dragging it deeper into the hole.

In its encore performance to create a new speculative bubble, Washington has done virtually nothing to alter its old script. All it has done is replace some actors and change some names.

For you, that means two things:

First, it means that bull markets — especially in sectors and countries that help investors escape this madness — have obviously returned. And no matter how much we may question their underpinnings, pragmatic investors must take advantage of the short- and medium-term opportunities as they come.

More importantly, it means that risk is back … and with that risk comes the continuing danger of unexpected busts.

Bottom line: Continue to approach the financial markets with great caution, investing moderately, taking profits out along the way, and retaining a big stash of cash.