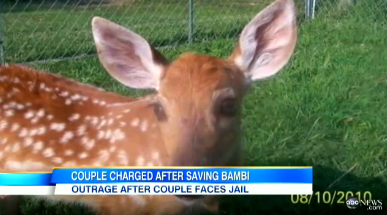 Should an Indiana couple go to jail for saving Bambi? That’s the question surrounding the case of Jeff and Jennifer Counceller, who rescued an injured fawn and nursed it back to health at their Connersville, Ind., home. The couple now faces the possibility of jail time and fines after state officials charged them with a misdemeanor for harboring the animal.

Jeff Counceller, a police officer in Connersville, and his wife were charged with unlawful possession of a deer, a misdemeanor that punished to its fullest extent could put the Councellers in jail for up to 60 days and cost them up to $2,000 in fines.

The couple rescued the deer more than two years ago after finding it on their neighbor’s porch. The Councellers said the deer had sustained injuries, and they wanted to nurse it back to health.

“I could feel all of the open wounds all along her back side and she wouldn’t stand up,” Jennifer Counceller told ABC News.

They brought the deer home and named her Little Orphan Dani.

The Councellers said an Indiana Conservation Officer stopped by their home and discovered the deer this past summer. The Indiana Department of Natural Resources wanted to euthanize Dani, saying she might be dangerous and a threat to people.

“I was devastated. I spent a year and several months nursing her into adulthood, getting to the point where she was able to go out on her own,” Counceller said.

On the day Dani was to be put down, the Councellers said she inexplicably escaped from their backyard. Even though Dani disappeared back into the wild, the Councellers’ legal problems didn’t go with the fawn.

The Indiana Department of Natural Resources said it couldn’t comment on pending litigation but that it did discourage people from taking in injured wildlife. This case could go to court next month, and if charges aren’t dropped, it will be left for a jury to decide whether the Councellers broke the law.

“No matter what the law is, we did what was right for the animal,” Counceller said.

Meanwhile, the story has caused uproar on the Internet. A Facebook supportpage has more than 6,400 “Likes” in support of the couple. An online petitionto drop the charges already has more than 3,800 signatures.

Rick on Change.org wrote, “An act of humanity should not be rewarded with a sentence.”

Michelle on Facebook wrote, “They are being punished for having compassion and showing kindness.”

The Councellers’ case could go to court next month