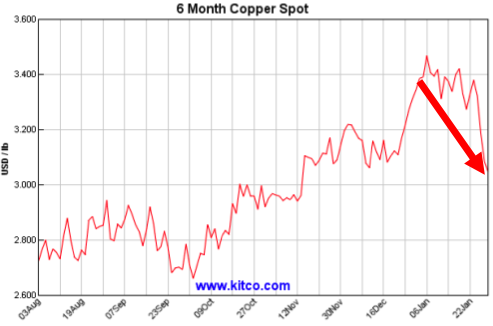 1. Copper and Deleveraging
2. A few Favorites

Good riddance to January 2010! It was a month of market malaise, decline and, as we predicted, the beginning of a correction – or worse the resumption of the bear market. The dramatic collapse of the copper market was more important. One look at Kitco’s 6 month graph is instructive.  After peaking at $3.40 per pound on January 6th, copper succumbed to an equally dramatic shift in investor psychology. Once again from a shift from hope that the worst was over, to fear that the worst was to come.  Between Jan 6th and January 29th copper was sold down – hard.  This AM copper is trading down at $3.01.  Copper has retreated 12% in three weeks. Furthermore the 50 day moving average is now broken and the MACD is ominous. I do not see a bottom on copper yet. The story in WTI oil is identical to that of copper. After peaking early in January (actually intra day at $83.95 on January 11th,) oil has declined in lock step. This AM crude is trading at $73.13 for a one month decline of 13%.

Part of this issue was a message from China that she is reining in liquidity. In the U.S. FOMC member and St Louis Fed Bank’s James Bullard has suggested that deflation is no longer a concern.  This suggests tightening for the US economy will soon (6 months?) become an issue for serious debate. The St Louis Fed chief said,

“The reason you can’t give a specific date is that it’s dependent on how the economy performs. If you have a strong economy, it could happen sooner. If you have a weak recovery, or a relapse, it may be later.”

It seems we are still in No Man’s Land from the viewpoint of our central bankers. If copper is the metal with the “Ph.D. in economics,” that copper and crude oil have joined forces adds weight to the argument.  They may be shouting that global economic growth is as yet in question. As deleveraging of the entire developed world continues to gain strength and the US dollar strengthens concurrently, pressure on GDP will increase.  The equity markets heard the roar.  The Dow could not even manage to end last week on a high note after a fourth quarter GDP (annualized) performance of 5.7%. The DOW failed to revive itself and fell 53 points ending the day Friday on a down note.

Today the White House will propose a $3.6 trillion budget with a record $1.6 trillion deficit. No matter how much fiscal heat as been applied to this economy, it has so far refused to budge at least from an employment perspective.  The Obama Administration will propose spending another $25 billion in state aid and a “mini” jobs bill of $100 billion. Let’s hope these are not the millions of “Green” jobs promised in the last jobs bill.  This increases the deficit to between 10% and 11% of GDP.  We think this is unsustainable.  Evidently so does the rest of the world.

This past weekend I spent considerable time reviewing the McKinsey Global Institute’s report on global deleveraging.  This is a must read for any one serious in understanding the future; at least the future for the next 5 to 7 years. There are several conclusions that merit attention but one stands out.  That is that after a financial crisis such as we have experienced, deleveraging requires, on average, 5 to 7 years.  During this timeframe such deleveraging tends to be a drag on economic performance.  Further the McKinsey study identifies 5 developed economies likely to be under such deleveraging duress. This leads to our focus on emerging economies, less levered, where discoveries of all sorts will be required.   More on that in a future MN but I will speak this week in Phoenix (Cambridge House Symposium) on what I see in our future.  In the meantime we all need to recalibrate our thinking because the aftermath of the great debt buildup of 2000 to 2010 is now upon us. To sign up for Michael Berry’s Discovery Investing FREE letter go HERE. Michael Berry has been a portfolio manager for both Heartland Advisors and Kemper Scudder where he successfully managed small and mid cap value portfolios. Dr. Berry has specialized in the study of behavioral strategies for investing and has been published in a number of academic and practitioner journals. His definitive work on earnings surprise, with David Dreman, was published in 1995 in the Financial Analysts Journal.