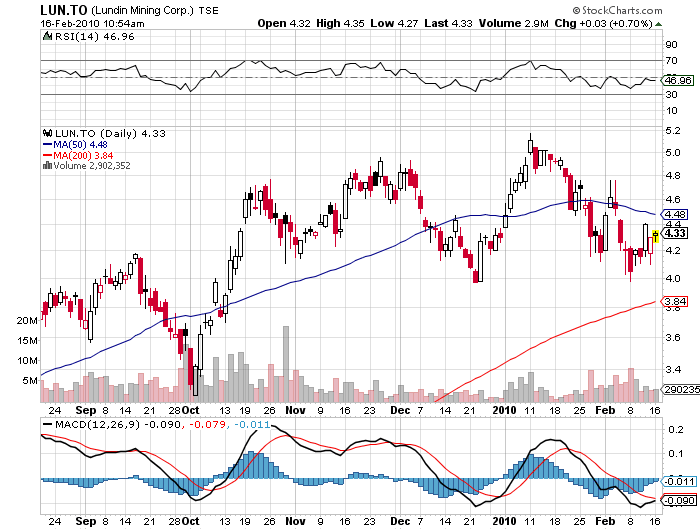 Feb. 15 (Bloomberg) — The Democratic Republic of Congo’s government should “respect its commitments” concerning Freeport McMoRan Copper & Gold Inc.’s $1.8 billion Tenke copper and cobalt project, according to a parliamentary report.
The Tenke project is the last question mark after a two- and-a-half year government review of all Congo’s mining contracts. The main point of contention between the two sides was over state-owned Gecamines’ stake, which was reduced from 45 to 17.5 percent in 2005.

Though the renegotiation was legal, the contract was “badly negotiated” by the government, the commission said. Tenke is now 57.75 per cent controlled by Freeport. Canada’s Lundin Mining Corp. has a 24.75 per cent share. The Tenke mine, which opened in March 2009, is currently producing 250 million pounds (113.4 million kilograms) of copper and 18 million pounds of cobalt a year. Its second phase of investment will allow it to produce 400,000 metric tons of the metals, according to the report. Cash-strapped Congo could receive as much as $50 million in payments from the project this year, the commission said.

The 2005 reduction of Gecamines’ stake was negotiated by then-vice president in charge of mines, Jean Pierre Bemba. Bemba was arrested in 2008 and is awaiting trial at the International Criminal Court for leading militias that raped and murdered civilians in the Central African Republic in 2002 and 2003.

The commission’s report was spearheaded by Modeste Bahati Lukwebo, a deputy in the National Assembly, and was sent to the government in late January.
Congo produces about half the world’s cobalt, a metal used in jet engines and rechargeable batteries, and holds 4 percent of global copper reserves.