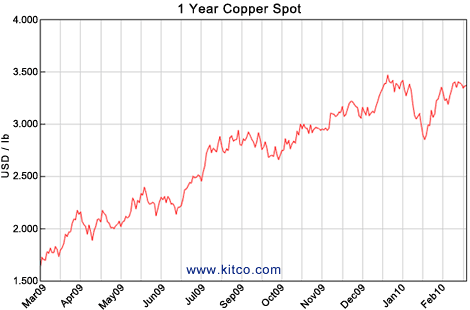 Talk about a comeback. Since its March 2009 bottom, copper has risen more than 140 percent, with the May COMEX contract closing at $3.38/lb on Friday: Yet for the past two months, copper has stayed stuck in a trading range, volleying back and forth between $3 and $3.50/lb without any indication of permanent gains or losses. Not even the earthquake that struck Chile last month or its subsequent aftershocks could spark a breakout. Last Thursday’s 6.9 quake, for example, didn’t even register in the copper market, with prices remaining flat at $3.37/lb for the day.

So can copper resume its upward climb? Or is the metal just biding its time before a major pullback?

Copper, as you may recall, is one of the world’s most widely used industrial metals, particularly in construction. Builders account for 40 percent of copper usage in the U.S., which is more than any other industrial user; the metal is a key ingredient in electrical wiring and modern plumbing. Copper’s also crucial for car fabrication, which uses a surprising amount of wiring; these days, the average luxury car contains about a mile’s worth of copper. Electric and hybrid cars use even more.

After the 2008 market meltdown, we saw industrial demand for copper shift from consumers in developed markets to those in emerging ones—primarily, of course, in China, which bought loads of the stuff during its stimulus frenzy last year. In fact, GFMS reported that China’s copper consumption swelled from 1.8 million tonnes in 2000 to a predicted 6.5 million tonnes in 2009—or an average annual growth rate of 15 percent. According the International Copper Study Group, China accounted for 40 percent of all world copper usage in the first 11 months of ’09, which more than offset the 16 percent slump across the rest of the world (including a 20 percent decline in the U.S.).

But Chinese demand may finally be slipping. Post Chinese New Year buying has been weaker than expected, reports Reuters, and worries about inflation in the country are on the rise. In February, the Chinese Consumer Price Index rose 2.7 percent year-over-year—that’s a 16-month high and above previous predictions. Rising inflation has led many analysts to suggest that China may soon rein in spending and tighten up its monetary policy (which would subsequently cut into the country’s appetite for copper).

“Some are concerned growth in China as we saw it over the last month will not be sustainable,” Commerzbank analyst Eugen Weinburg told Reuters. “Some expect further tightening in China soon, possibly in a question of weeks.”