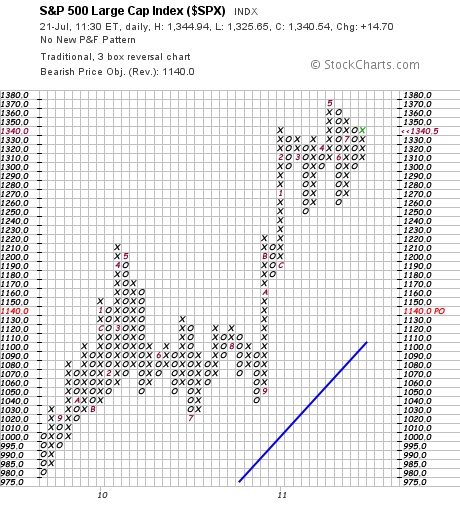 By Peter Grandich: This is going to be impossible for many to accept but I learned a long time ago to never fight either City Hall or the tape. The U.S. Stock Market is close to giving one of its most bullish technical “buy” signals (that’s right, I said buy signals) per one of the most reliable and unemotional indicators – point & figure charts. Please note two things regarding this:

1.  I like to error by requiring an extra box to be taken out so I’ll wait for 1360 before accepting the “signal”

2. My chicken coop will have proven a worthy place to hide while the bears got slaughtered.

Peter also agrees with this article: After gold’s brilliant run, is it miners’ turn to shine?

By Richard Russell: Sometimes a chart says it all, assuming, of course, that there’s something to say. The P&F chart of the widely-followed S&P below shows an extended period of consolidation, with a bearish designation.

However, a rally to the 1350 box will turn the chart bullish, and as I write the Sept. S&P futures are trading at 1306, not far from the upside breakout point.

In the meantime, the chart of GLD shows a clear upside breakout to 156 with a bullish upside “target” of 202. Note that most of the action since 2009 has taken place bullishly above the rising blue trendline. For those holding those reluctant gold mining shares, the P&F chart below of GDM should be heart-warming. The chart is bullish, with a further bullish breakout coming if GDM can hit the 1700 box.

The Legendary Richard Russell (87yrs old today) has made his subscribers fortunes. He made a fortune for his subscribers in Gold in the original run from the 30’s to $850, got his subribers into Gold at $300 & below and still bullish @ $1,500 today. One of the best values anywhere in the financial world at only a $300 subscription to get his DAILY report for a year. HERE to subscribe.

Peter Grandich is the founder of Grandich.com and Grandich Publications, LLC, and is editor of The Grandich Letter which was first published in 1984. On his internationally-followed blog, he comments daily about the world’s economies and financial markets and posts his views on social and political topics.  He also blogs about a variety of timely subjects of general interest and interweaves his unique brand of humor and every-man “Grandichism” expressions with his experience gained from more than 25 years in and around Wall Street. The result is an insightful and intuitive look at business, finances and the world, set in a vernacular that just about anyone can understand. In his first year, Grandich’s wildly-popular blog had more than one million views. Grandich also provides a variety of services to publicly-held corporations on a compensation basis.