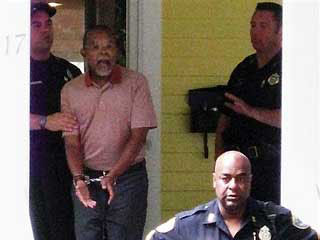 Comedian/actor Bill Cosby was inside the FOX25 News studios today and shared his thoughts on the arrest of prominent black scholar Henry Louis Gates Jr. and President Barack Obama’s “stupidity” comment about police.

Ed Note: President Obama called the police stupid in his Press Conference last night. FYI one of the attending officers was black, another Hispanic, the arresting officer was White. Obama’s comment: “My understanding is at that point Professor Gates is already in his house. The police officer comes in, I’m sure there’s some exchange of words, but my understanding is, is that Professor Gates then shows his ID to show that this is his house. And at that point, he gets arrested for disorderly conduct — charges which are later dropped.

Now, I don’t know, not having been there and not seeing all the facts, what role race played in that, but I think it’s fair to say, number one, any of us would be pretty angry; number two, that the Cambridge Police acted stupidly in arresting somebody when there was already proof that they were in their own home; and number three, what I think we know separate and apart from this incident is that there is a long history in this country of African Americans and Latinos being stopped by law enforcement disproportionately. That’s just a fact.

And yet the fact of the matter is, is that this still haunts us. And even when there are honest misunderstandings, the fact that blacks and Hispanics are picked up more frequently and often time for no cause casts suspicion even when there is good cause.”

…from the arresting officer who is white:

In an interview today with WBZ radio, Crowley said that while he “didn’t vote for” Obama, he supports “the president of the United States 110 percent.” But that does not mean he agreed with Obama’s comment that Cambridge police “acted stupidly.”

“I think he is way off base wading into a local issue before knowing all the facts,” Crowley said.

This morning on WEEI, Crowley spoke for 22 minutes and offered his most detailed public explanation of why he handcuffed the renowned professor of African-American studies.

“He was arrested after following me outside the house, continuing the tirade, even after being warned multiple times, probably a few more times than the average person would have gotten,” Crowley said.

The hosts asked: “How many times?

“He was cautioned in the house, meaning calm down, lower your voice,” Crowley said. “Once we got outside in front of the general public and the police officers that were assembled there, two warnings, the second warning with me holding a set of handcuffs in my hand. It was something I really didn’t want to do, but the professor at any point in time could have resolved the issue by quieting down and/or going back in his house.”

Crowley continued, “There are so many things in this incident that keep me scratching my head wondering. I apologize, I was not aware who professor Gates was. And when I read the name off the card, it wasn’t like I said, ‘Oh, wow, that’s professor Gates.’ I’m still just amazed that somebody of his level of intelligence could stoop to such a level and berate me, accuse me of being a racist, of racial profiling, and speaking about my mother. It’s just beyond words.”

During the interview, the radio hosts made it clear how they felt about the arrest of Gates, telling Crowley that he did not “have to defend your character here because there is no reason to, you didn’t do anything wrong.”

“God knows the public is supporting you,” one of the hosts said. “Maybe not the elites, maybe not the president of the United States, but the reaction on message boards, the reaction on talk shows, and just people on the street — they are on your side, officer, you can be sure of that.”