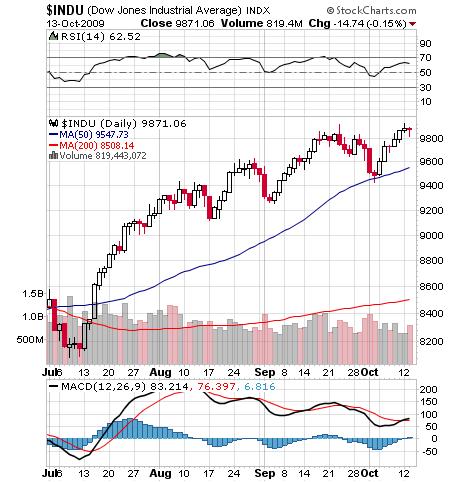 “I wouldn’t want to be a member of the Federal Reserve Board of Governors these days. It’s been over a year since the Lehman Brothers collapse (Sept 15, 2008), yet despite all the unprecedented actions taken by the Fed in the interim (bailing out banks, slashing short-term interest rates to 0%, and printing over a trillion dollars in new money), the US economy appears to be on extremely shaky ground.” From Fred Hickey’s great High-Tech Strategist.

Below I show two charts.The first is the D-J Industrial Average, which closed last Friday at a new recovery high of 9864.94. The second chart shows the D-J Transportation Average which failed by a wide margin to confirm the Industrials. If you manufacture, but you are not selling or shipping your products, that’s an obvious negative. If you’re selling and taking orders to ship products that are not being manufactured fast enough or in large enough quantities, that’s a clear negative. When manufacturing is going well and the products are being sold and shipped, that’s a healthy combination. All of which explains why when both the Industrial and Transportation Averages are rising to new highs together, the situation is both healthy and bullish.

Those are the fundamentals. Technically, and this has been time-tested, when one or the other Average breaks to new highs or new lows for the move, and the breakout is not confirmed by the other Average, it is usual for the prevailing direction of the market to be halted or reversed.

To bring it all to the present, we now have Industrials at a new high for the move, but the Transports have failed to rise above their comparable high of 4015.16. Transports closed last Friday at 3875.32, which was 140 points below their prior peak of 4015.16. As a rule, the closer together (in time) a confirmation occurs, the more authoritative. The longer it takes for a confirmation, the less important the final confirmation.