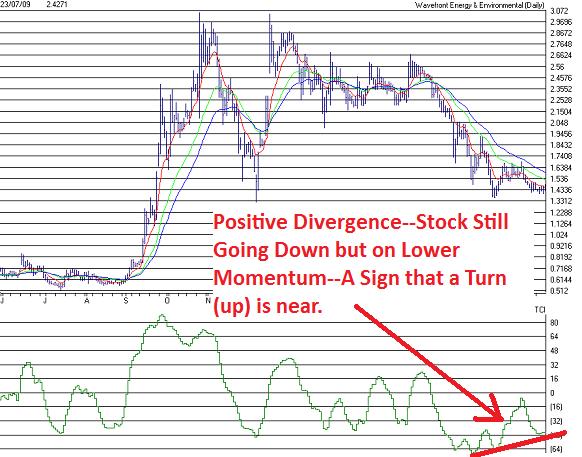 I recently wrote that junior energy stocks were trading like they had an incurable disease; nobody wants to touch them.  But now several junior oil stocks are starting to show positive divergence, which means that the momentum of the downward selling pressure is getting less and less.

This is also called “momentum non confirmations”, and so far my observations are focused on the short term charts on many of the junior oils; it’s too early to tell on most of the longer term, weekly charts.

This means that, in the short term, the stocks are running out of momentum on the downside, and have started to show some signs of upward momentum. This is often a good indicator of a possible change in direction in share price.  It also means that good news out of junior oil stocks should once again get recognized by the market.

Here are a few charts that illustrate my points: Some short term charts have completely turned, like Bellatrix (BXE-TSX) Now, here is one longer term chart that is showing good long term momentum improvement – the 3 year chart on the TSX Energy Index. On many longer term charts, the intermediate indicators have now returned to neutral, or slightly oversold, and many have returned to their longer term moving averages.  This is a good start, but more base building (prices trading within a certain range, like oil between $70-$90/bbl) may still be required.

Generally speaking, the longer the base, the larger and more sustainable the move up.  This extended basing period would provide a larger base for these stocks to launch the next leg up.  And of course this all assumes continuing solid fundamentals supporting these stocks such as strong oil prices and positive growth.

We may see another retest of the recent lows, although this isn’t necessary for the technicals to turn positive. Like these charts show, it’s more important now, in the mid part of a price consolidation, that the market starts to see higher highs and higher lows in momentum, and the prices will follow – if not move in tandem, as I showed on the Bellatrix chart.

But this is only happening on the short term charts. Because the intermediate indicators have not yet shown any signs of basing yet, these charts may back and fill a few times in the near term.  Whether the news flow on oil prices and markets is good or bad will dictate how much more time is needed before prices begin another positive price trend.

And that brings up an important point.

You’ll recall that after the significant price moves of 2009, price momentum was extremely overbought. And, as I mentioned, it’s taken this long to return to slightly oversold on an interim basis.

So there could be a lot of work to do yet on these long term junior oil stock charts.

But that creates what I call a stockpicker’s market; and I’ll take that.  That’s where the educated investor can make superior returns, while the average oil and gas investor waits for a sustained uptick in the price of oil.

DISCLOSURE – I own Bellatrix and Equal